← VOTE FOR POETRY IN DAILY LIFE!
INTO THE OLD FOUNDATION →

While there are many uses for calculators, I think the average person uses them for one thing: keeping track of money. What’s in their checkbooks, what their bills will amount to this month, what’s in the budget for groceries, vacations, or necessities. But earlier this week, I met someone who uses a calculator for something entirely different.

Her name is Merissa and she is a February writing resident up here at the Colony. She makes jewelry out of the keys from old calculators. Cool, huh? She mentioned it the other day at dinner, and I thought this was the neatest thing.

Today is my birthday. I’m 39. Merissa arrived only on Monday, and has, as I have, been chipping away at her work, so we haven’t spent much time together. But leave it to an Aquarian (her birthday is next week)! This afternoon, she knocked on my door and brought me a present: a pair of earrings made from calculator keys! Number 9’s to be specific.

“You can wear them as 66, 99, or 69!” she said (of course, as 96, too, but that’s just not as fun a number). I was so touched by this gesture that a woman I barely know cared enough to bring me a gift when I was so far away from home. Merissa also had no idea how much this particular gift meant on this odd birthday (it has been odd). The beginning of today was a little bit rough, and this gift sent the message that I needed to remember what’s really important to me—and it’s got nothing to do with calculating. 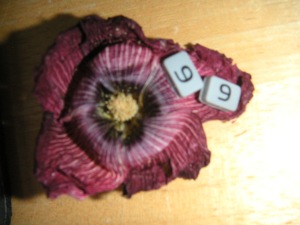 ← VOTE FOR POETRY IN DAILY LIFE!
INTO THE OLD FOUNDATION →