My short story “Dead Line”—about paranormal investigators who start a paranormal crisis hotline and get unexpected results—has just been accepted for the May issue of Death Head Grin. 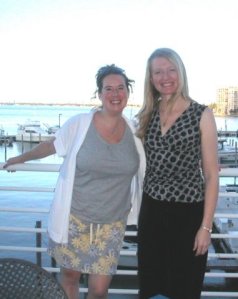 Tamara and I after dinner at the Bleu Moon Restaurant and Lounge, on the roof of the Doubletree Grand Hotel Biscayne Bay-Miami, May, 2009.

In other news, writer Tamara Linse, whom I met at the Miami Writers Institute last May, has asked me to write an article for her blog. I’m thrilled, and am hard at work on something now. It’s an honor to be asked by a writer who’s so enormously talented—her work has appeared in Word Riot, Prick of the Spindle and the Georgetown Review, among others. Tamara’s latest short story, “Revelations,” makes its debut in Fried Chicken and Coffee this month, and it’s quite a ride (nice and dark and right up my alley)! You can check that out here.