CREEP, CREEP 2, DARK DISCUSSIONS and the most unsettling Christmas present EVER 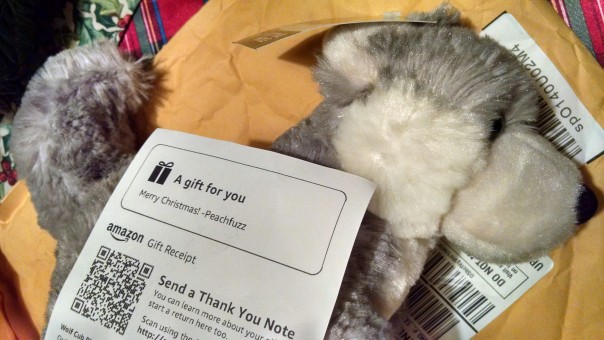 There are some Christmas gifts that are just so personal, clever, and awesome it’s unlikely they’ll ever be forgotten. I came home from a particularly rough one and received just that—and so did my friends Eric and Phil. 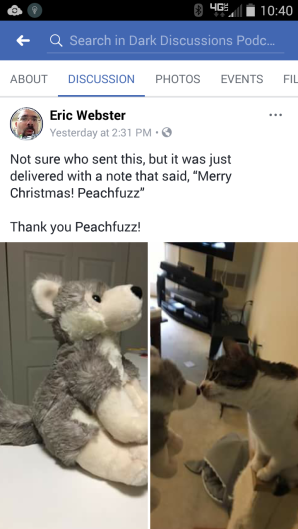 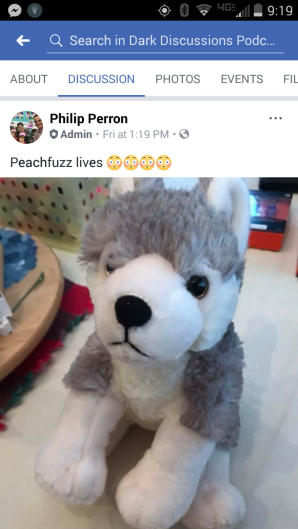 Most of you know that I’m a part-time co-host on a horror film podcast called Dark Discussions. The five of us—Phil, Mike, Eric, Abe, and me—tend to be irreverent and do a lot of laughing. A year or so before I joined them, they discussed an unsettling 2015 indie gem called Creep. Much joviality surrounded one of the movie’s more outlandish moments which was a little on the dirty side, if you get my drift.

You can listen to the DD episode on Creep here and the one on Creep 2 here…and you can watch the films here:

The Creep franchise focuses on a serial killer; but, much like a narcissist, he likes to toy with and manipulate his victims first in a series of bizarre emotional ploys. He first cons his victim—in both movies, an aspiring filmmaker—with the lure of cash to film him for one day, evoking sympathy with one sob story after another as things get more complicated. What’s key to my anecdote, though, is that at one moment in the original film, he dons a wolf mask he calls “Peachfuzz.” That dirty moment I referenced? He touches himself while murmuring Peachfuzz’ name, later explaining to his victim that he thinks of himself as a wolf—tough on the outside, tender and loving on the inside.

After the victim leaves to go back to his life, our serial killer regresses to mailing strange packages before doing him in. The contents of at least one of the packages always contains a stuffed wolf.

As far as my scary little package, we’re still not sure which co-host did it; nobody’s owned it yet. Or even better if we never know. Because the brilliance of this isn’t only the reference to all the fun we have on the show, it’s got that creep factor: I could, indeed, be this guy’s next victim. Oh, Peachfuzz…

The masthead for DARK DISCUSSIONS Episode 310: CREEP 2. At the top right, you can see the Peachfuzz mask. Photo collage by Philip Peron.

Tags: Creep, Creep 2, Dark Discussions Podcast, Horror movies, movie where the guy in the wolf mask dances around, movies with stalkers, serial killer movies, the nature of the wolf

Tags: Heat Miser, Rankin Bass Christmas Specials, Snow Miser, the Christmas special with the snow guy from the 1970s, The Year Without a Santa Claus

Rent at your own risk: why you should skip renting a car from Enterprise 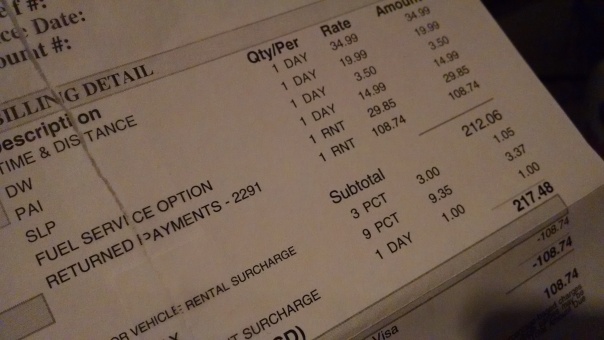 I’m hoping that by sharing this it’ll help someone avoid lots of hassle.

Enterprise Rent-A-Car has a new policy: charge for the whole day/rental period even if you decide not to take the car. It’s not on any of their paperwork, but this is, apparently, the way they are doing things now. That’s what I was told by the Danbury, CT store on Federal Road.

Here’s the brief version: Nathan and I rented a car. I ended up getting sick, and we cancelled the order. Unfortunately, I had signed the paperwork. We offered to pay a fee. The delivery person said, “no problem, we understand, we’ll cancel it.”

Nope, they didn’t. They charged my credit card for a full day’s rental–$108. When I called to complain, the gentleman explained this is their new policy because “well, for those couple of hours, we couldn’t rent the car to someone else.”

Let me make this clear: I don’t mind paying a fee. I’m not paying for 24 hours when I had the car “tied up” for only two or three.

Because Enterprise wouldn’t reverse the charges, I reported it as fraud to my credit card company. They investigated—and agreed. At which point, Enterprise sent me a bill with a threatening note that it will compound interest and fees.

Just be aware of this new policy they have and rent at your own risk. #enterprisewellripyouoff