A trip through time: The Bronx Zoo’s DINOSAUR SAFARI

I think this is hilarious. We’re being chased by a Tyrannosaurus and we look like we’re on a cruise.

I’m going to keep this as spoiler-free as possible, because nothing ruins an adventure like knowing every damn little thing about it beforehand (it’s really not an adventure if that’s the case). However, I’m going to include a couple of my favorite photos and share some details, so if you’re planning on visiting the Bronx Zoo’s Dinosaur Safari this summer and want to stay completely in the dark, I’d advise skipping the rest of this post (except scroll down to “A word on buying tickets.” That stuff you’ll want to know).

Hold my beer! I got this. Nathan and I were very excited to attend the Bronx Zoo’s Dinosaur Safari on the premiere weekend (Easter Sunday), despite the giant lines.

The Safari entrance is located at Fountain Circle, which is at the end of Astor Court (and I think was the zoo’s original entrance way back when it first opened). If you’re on the other side of the park—say down by Asia—the best way to go is hop on the zoo shuttle and get off at the stop near World of Birds and Tiger Mountain. It’s not far to walk from there.

If you’re wondering where this ride actually takes you and you’re a BZ geek like me, it goes back behind the Birds of Prey exhibit over service roads that aren’t open to the public.

This azhdarchid pterosaur greets visitors above the ride’s queue.

Be aware that this is a popular attraction, and the lines may be very long. The nearest bathroom to the line is up at Madagascar off Astor Court. It might be worth visiting the restroom beforehand.

We joked about the hour and 45-minute wait being just like the lines at Walt Disney World.

Okay, so I’m a big kid, but I had no idea there was a technical name for fossilized dinosaur poop: Coprolite. Kinda cool.

Once you’re in line, you’ll be given a souvenir guidebook which catalogs the dinos, shares information about them, and compares them to modern-day creatures you can see elsewhere in the zoo. I thought this was a really neat feature.

Dinosaur Safari guests get tickets (great souvenirs; we got to keep ours) as well as a field guide which is packed with information about the dinosaurs you’ll meet on your journey.

There are staff members on hand to entertain small children, teaching them about adaptations and engaging them in a game of “Dino Says.” I don’t know if this is going to be available all the time or only on peak days, but it was a nice touch.

Before you board your vehicle, you can pose before a green-screen to have your photo taken (it will appear with a scary dinosaur backdrop). Your photo will be available to purchase at the end of your trip.

The ride vehicles are wagons pulled behind pick-up trucks. If you’ve done hay rides, then you’ve ridden in one of these before. And yes, there are vehicles that are fully handicap-accessible. If you’re concerned about how bumpy the ride is, don’t be. It’s actually pretty smooth, although there may be a jounce here and there. The vehicles go very slowly. 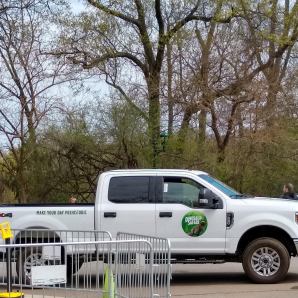 The pick-up truck that pulls the Dinosaur Safari ride vehicle.

The wagon for the ride is exactly the same type of wagon used for hayrides. There are benches on either side and a bench in the middle. The limit is 40 persons.

Our guide’s name was Rob, and he was really enthusiastic (I’m betting he loved dinosaurs as a kid). He cracked a few Jungle Cruise ride style jokes along the way, and it would’ve been fun to hear more.

Our Dinosaur Safari guide’s name was Rob. He was spirited and a lot of fun.

There is sweeping, Jurassic Park-esque music that plays just before you enter the trail, and it honestly does ramp up the excitement. Good call!

Uh-oh. One of the raptors was going to the Dinosaur Hospital. I guess he wasn’t feeling well that day.

The scenes you’ll see depicted are based on actual fossils that were found together. So although all the dinos are from different time periods, the tableaux that contain multiple animals are from the same time period and illustrate, according to the fossil record, scenes that actually happened. 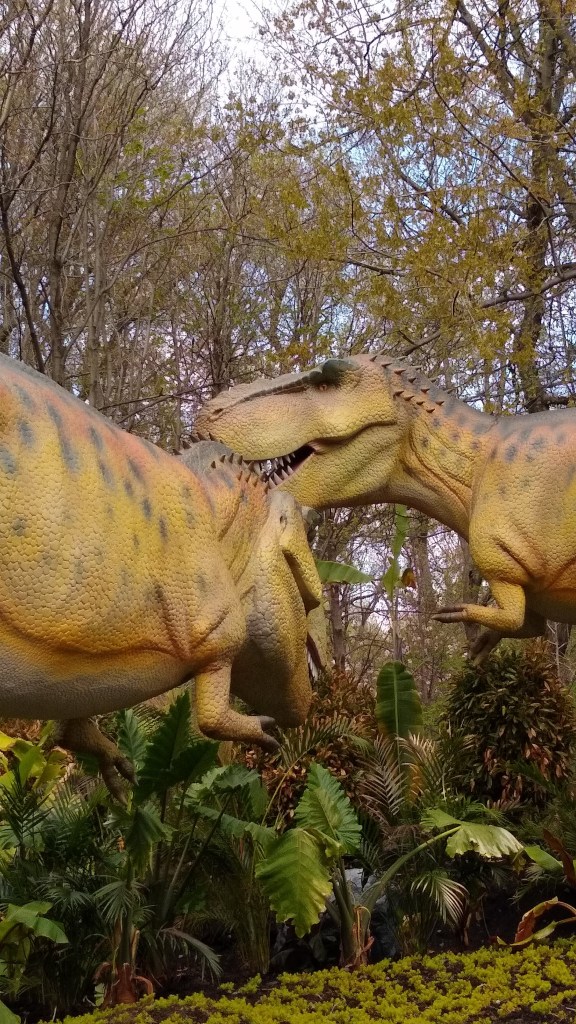 Although we don’t know why they battled, paleontologists think that Tyrannosaurus Rex fought each other over territory and mates.

Another great thing about this ride is that we’re clearly beyond the land of the same old T-Rex and stegosaurus. Yes, those fellows make an appearance, but the tour features dinosaurs I’ve never heard of, like the kosmoceratops. 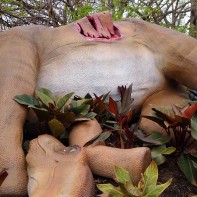 A couple of rapetosaurus (pronounced rah-PEE-toe-SORE-us), large herbivores, were victims of a hunting pack of carnivorous majungasaurus.

I liked this pentaceratops because the decorations on his crest reminded me of the design on a king cobra. 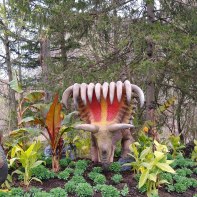 How cool are these kosmoceratops? Paleontologists believe that their horns weren’t structured soundly enough for defense, so they were probably only present for attracting mates.

These dinosaurs are cool. They move, they make noise, and your guide sheds light on what you’re looking at. They’re not Disney or Jurassic World: The Exhibition level, but they are certainly not cheap carnival either; far from it. They move pretty naturally and I didn’t see any mechanical jerking around. I could buy that these were real. 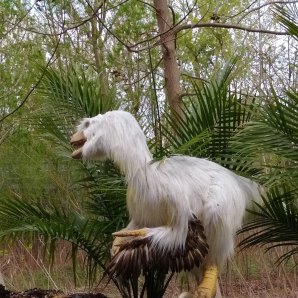 This is my new favorite dinosaur. The troodon was the creepiest of all of them in the ride, probably because they reminded me of monkeys, and I hate monkeys. But these guys fed on the eggs of large animals, like the maiasaura, which built mud nests like today’s flamingos. 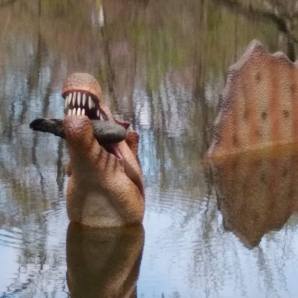 The spinosaurus thrusting up out of the Bronx River was a scary sight! Spinosaurus were semi-aquatic. Definitely would make me think twice about swimming in a river.

The staff has done a wonderful job, also, with the vegetation in each scene: there are palms and exactly what you’d expect to see in that type of environment. If you have an imagination, it’s not a stretch to believe just for a moment that you’re actually looking into the past.

I loved the surreal aspect of this. Some of the dinosaurs’ positions were in areas where apartment buildings from outside the zoo served as a backdrop. It was crazy to see a dinosaur in front of a modern structure in the real world. 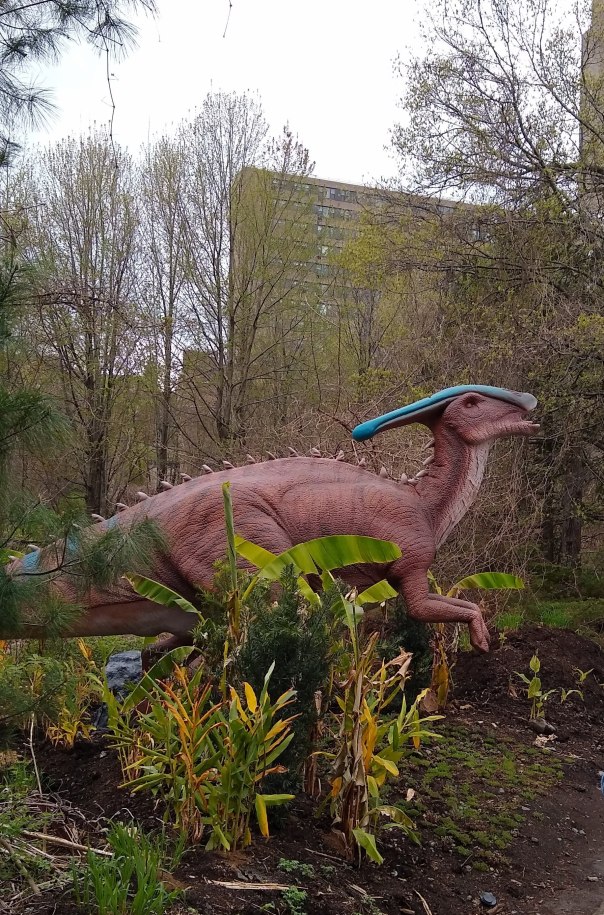 Against the backdrop of modern-day apartment buildings, this parasaurolophus looked surreal. Click below to hear this animal’s haunting call.

Another great thing is that they are very close to the vehicle. You really get a sense of how large these animals actually were because of that, and, of course, it’s a great opportunity for video and photos, although honestly, don’t ride this thing and spend the whole time looking through a viewfinder. Really enjoy looking at it live and let yourself believe. It’s worth it.

You exit the ride vehicle at the Field Site. The area has large dinosaur bones, a dig site for kids, a cart with dinosaur-related souvenirs, a photo station (so you can take your photo with a T-Rex), and the counter to purchase the green-screen photo you took before you boarded the ride if you wish to do so.

Your journey lasts approximately ten minutes, give or take. Nathan and I waited in line nearly two hours for this (it was not only a weekend, it was a holiday, and we chose to be stupid and go right after lunch—when we were done at 3 p.m., the wait was down to about an hour), so of course, the ride felt short. I think a good amount of time to wait for this is about 30 to 40 minutes max. More than that, you may want to come back at a different time of day. 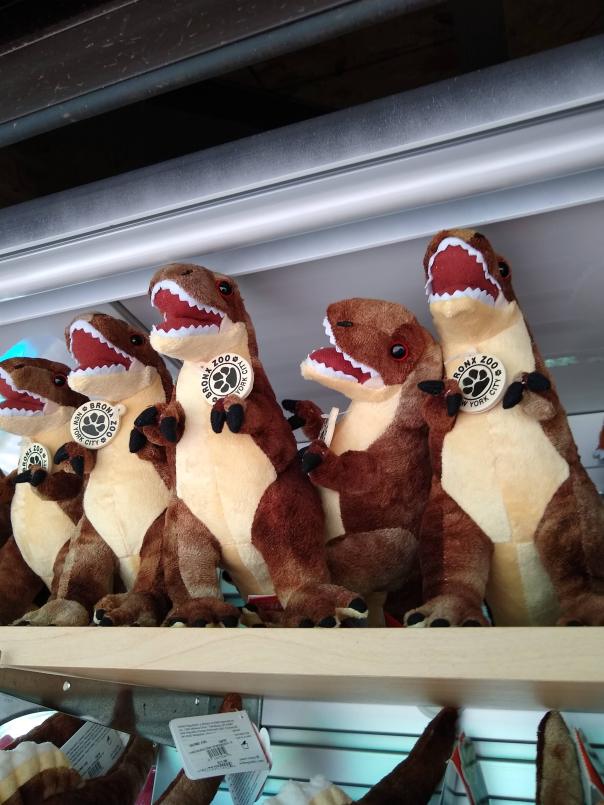 The gift card at the end of the ride was crammed with stuffed dinosaurs. I was tempted, but didn’t get one…I have so many stuffed animals I don’t know what to do with them all as it is!!

All in all, it was really cool, and I highly recommend it, especially for dinosaur freaks. I’ll go back and see it again, for sure! 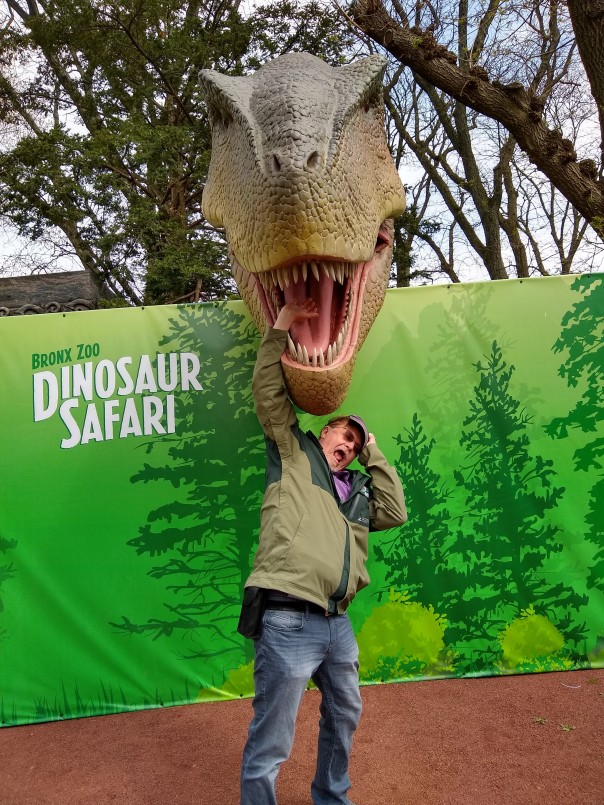 Nathan clowns around with the T-Rex. Is that a smart idea?

A word on buying tickets

If you’re a non-member, the $6 attraction fee is included in the total experience ticket. You can also purchase them separately as an add-on to a base ticket if you know you won’t have time to visit all the plus-price experiences in the zoo that day.

However, if you are a member, this attraction is not included, which means your discounted $4 ticket still needs to be purchased. The member booth to purchase tickets is all the way up near the front of the line, but you can’t access it without waiting in line and getting to that point. The staff will ask you if you’re a member, and then pull your entire party right out of your hard-earned spot so you can purchase your tickets. When you are ushered back in line, several people have gone ahead of you, which is discouraging. This also pisses off several people who were behind you, because now they think you’re cutting the line.

Suggestions for members who want to visit:  A, purchase your $4 ticket online ahead of time. B, if you didn’t purchase online ahead of time and still need to buy tickets, don’t let them yank your entire party out of line. Choose one of you to purchase at the ticket booth; then, that person can catch up with you and you haven’t lost your place.

The Bronx Zoo’s Dinosaur Safari opened April 18 and runs through November 3, 2019. Admission to the attraction is $6 for non-members (although it is included if you purchase a “total attraction” ticket) and $4 for members (as noted above, buy them online ahead of time to avoid the mess of being pulled out of line).

Hope you’ll get a chance to visit!

Posted on June 2, 2019, in Deep Thoughts & Fun Stuff, Events, Reviews and tagged Bronx Zoo, Bronx Zoo Dinosaur Safari review, how much are tickets for the Bronx Zoo dinosaur safari, kosmoceratops, parasaurolophus, rapetosaurus, spinosaur, things to do at the Bronx Zoo, troodon, what kinds of dinosaurs are in the Bronx Zoo’s dinosaur safari. Bookmark the permalink. Leave a comment.