← Meet Stacy Horn…and read the Foreword for THE SHADOWS BEHIND
HAPPY 4th OF JULY! →

Here’s a collage my phone put together for me. I love this. I think the heath hen was my favorite due to its tragic final cry before extinction.

There is something about the overwhelming sadness of extinction that has always sucked me in.

So imagine how excited I was when, recently, I went to bird watch at the Norman Bird Sanctuary in Middletown, Rhode Island and discovered something called The Lost Bird Project.

In 2012, artist Todd McGrain created bronze sculptures of five extinct Northern American species of birds and then made an attempt to install each memorial where the last of its real-world counterpart was seen.

A black and white shot of the great auk sculpture.

Over the past seven years, the five—the passenger pigeon, heath hen, great auk, Labrador duck, and Carolina parakeet—have been exhibited at several locations, including the George Eastman House in Rochester, NY; the Post Ranch Inn in Big Sur, CA; the Wildlife Museum in Jackson Hole, WY; and the Kampong National Tropical Botanical Garden in Coconut Grove, FL. It has also been exhibited at the Smithsonian in Washington, DC, and many other museums and nature centers.

There is a little bit more information about each bird in the photo captions (except for the Labrador duck, which was in a garden I didn’t get to, but for the record—it went extinct in the late 1800s).

Me posing with the statue of the Passenger Pigeon, which at the Norman Bird Sanctuary is located near the entrance. The last specimen in the wild was shot in 1914.

Me and the Passenger Pigeon sculpture. A selfie did not work, but it would’ve been cute if you could see what the hell I was hugging!

The heath hen. This is the saddest story of all, but right up my alley in terms of romantic tragedy. From the NBS Lost Bird Project brochure: “Heath hens usually only flew to the lower branches of the trees…in 1929, ornithologists witnessed a hopeful male fly to the top of a tree and call out, loudly and repeatedly, across the island. There were no heath hens to hear his plea.” That final male was last seen in 1932.

Me and a heath hen, which was a favorite foodstuff in Colonial times. This is the saddest story of all, but right up my alley in terms of romantic tragedy. From the NBS Lost Bird Project brochure: “Heath hens usually only flew to the lower branches of the trees…in 1929, ornithologists witnessed a hopeful male fly to the top of a tree and call out, loudly and repeatedly, across the island. There were no heath hens to hear his plea.” That final male was last seen in 1932.

The largest great auk population was affected when an 1830 volcanic eruption destroyed its island home. What few were left huddled on Eldey Island (near Iceland), where men could pick them off easily. The last one was killed in 1844.

Me and the great auk, which at the Norman Bird Sanctuary is located near the Good Gardens.

The Carolina Parakeet, which is located in the orchard. No one has any idea when the last of the wild ones died out, but there were a pair that were alive in a zoo until 1917 and 1918.

Cool selfie, except you can’t tell what the hell it is I’m posing with. It’s a Carolina parakeet.

This installation will be at the sanctuary until sometime in 2020—the sanctuary’s site notes that it will be there “two years” and the announcement of its opening was in September, 2018. So if you really want to see these and you live within a decent drive time from Middletown RI, I’d go as soon as you can. If you’ve never been to that area of the state, it’s near Newport, so there is plenty to do to make a full vacation out of it and put this on your itinerary. If you’re a birder or birdwatcher, then this is a place that should be on your bucket list. 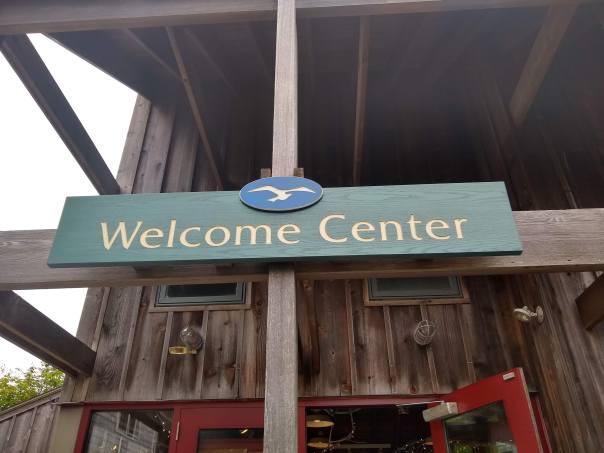 The Welcome Center at the Norman Bird Sanctuary in Middletown, RI. You can get maps and information on everything at the center, including the Lost Bird Project.

And if you’d like to know what my bird count was for the afternoon (not really high, I wasn’t there to build a list for the day) here it is: 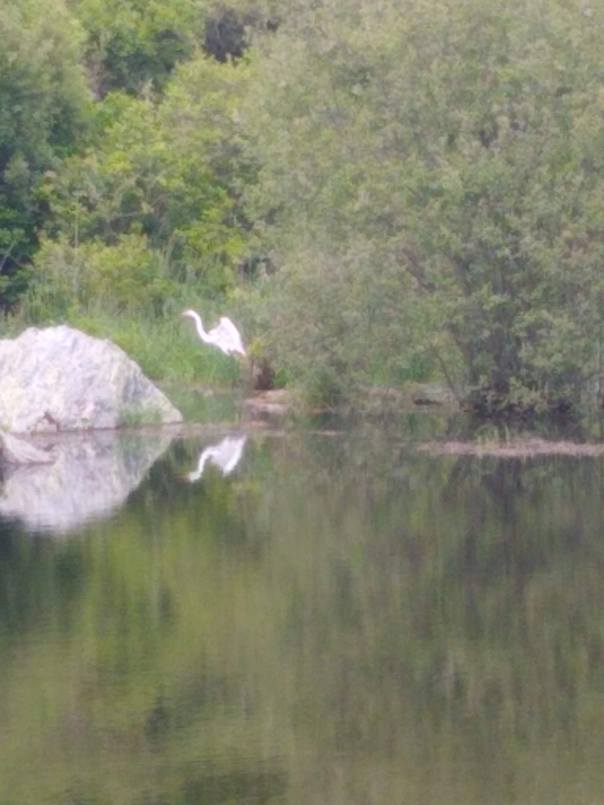 I saw a great egret at one of the NBS’ ponds. This is a crappy picture, but at least I have a record of it. It was awesome when he flew–when you’re that close, it’s hard to believe how large the wing span is. Majestic is honestly the only word.

Map of The Lost Bird Project at the Norman Bird Sanctuary

This map of the Norman Bird Sanctuary shows the sculpture’s locations.

(As of this posting, if you have Amazon Prime, you can watch this for free.)

Hope Is the Thing with Feathers: A Personal Chronicle of Vanished Birds, by Christopher Cokinos

← Meet Stacy Horn…and read the Foreword for THE SHADOWS BEHIND
HAPPY 4th OF JULY! →