THE GOODBYE PROJECT: Letting Go is Good, Yo! Episode 14–V

About The Goodbye Project:

There are so many of us who can’t part with objects because of the sentimental attachment we have to them. You know—the graduation tassels, the barfed-on stuffed animal with the missing eye, the coat your late father bought for you because you begged. So what do you do when it’s time to let go of these beloved items because it’s absolutely necessary?

I’d read someplace that one of the best ways to let go of an object is to know that you have a photo. Sure, you can photograph it before you get rid of it. The Goodbye Project takes the idea a step further: go back and find photos of yourself actually with, using, or wearing that object, and blurb a bit about the memories it invokes.

Why? Everything has a story.

And because of that, the object deserves more than just a hasty trip to the Goodwill or the trash without a second thought. 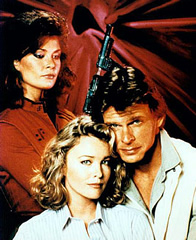 Who remembers when V—the first miniseries, not the most recent one—aired on television back in 1983? The two-parter was absolutely the talk everywhere: the Visitors are lizards! Oh, my God, did you see her swallow that guinea pig? How did they do that? A year later, the three-part follow-up, V: The Final Battle, delivered such shocking surprises as the birth of twins—one lizard, one human—and the secrets of the Visitors’ “Conversion” process. V: The Final Battle aired in May of 1984.[1]

I was in middle school, and was tantalized by all the talk in the halls. I wasn’t allowed to watch either miniseries—my parents felt it too scary. By the time The Final Battle aired that October as a lead-in to the ensuing series, though, I was 13 and made it clear that I did not care what they thought and was watching it anyway.

I got caught up on what I’d missed and was hooked. Several friends of mine at school were watching it, too, and soon it became part of our daily lives.

It started with each of us choosing a “role” from the series to play. While I don’t remember exactly who was who, I can tell you that my friend Kristina was Mike Donovan, I was Diana, my friend Sam was Julie, my friend Sue was Elizabeth, and my friend Shannon was Lydia.

Back in the mid-1980s, it was the cool thing to do to pass decorated notebooks back and forth in class: you’d write a note in the book to say something to your friend, pass it to her, she’d either pass it back to you or someone else, et cetera (many of the ones I saw floating around the school were adorned with sticker collections—remember those?) In this way, plans were made, gossip was shared and rumors were spread. We wrote notes to each other not just as ourselves, but as the characters from the series.

Here’s the notebook we had for passing notes in the fall of 1984—before we got into V. You can see the big attractions before V were Hunter and The A-Team, but there are the names or references to several other extinct shows on there—who remembers Paper Dolls? (If you don’t, you can check it out here: http://en.wikipedia.org/wiki/Paper_Dolls).

Also, you probably can’t see it well in this photo, but part of the cover is cut out (I suspect I moved it to the cover of some other notebook), and if you could read the handwriting beneath the hole, you would see part of the word “Magnum” (for Magnum, P.I.) and part of the world “McCormick” (probably Mark McCormick, from the TV series Hardcastle & McCormick). I got all of the wording and pictures from the T.V. Guide. Yes, for those of you too young too remember, T.V. Guide used to be a decent magazine with lots of cool artwork that enticed you to watch your favorite programs. I found another V Geek who knows this to be true—check out his very cool page here:

Here’s the notebook we had for passing notes AFTER V became the center of our universe. This notebook was probably from the winter of 1985, because I believe the episode to which the artwork at the center is referring is called “The Champion,” which aired on February 8, 1985—the night I had my birthday sleepover. Part of the party was watching this episode. One of our favorite dialogue exchanges which we quoted often in the halls was one that happens to be cited on IMDB (it truly is a funny piece of dialogue, so I’m not surprised):

Diana: Idiot. If you had been, you would be dead.

The note-passing gave way to full-blown role-playing. To pass the time until the next episode, we’d role-play, mostly in school at lunch, or in the halls between classes, but if we were at someone’s birthday party or over someone’s house, we’d play there, too. Here are photos of some of us in action (I’m pretty sure my friends are going to kill me, but why not? Click on the photos to see the captions alongside them—it’ll tell you who’s who): 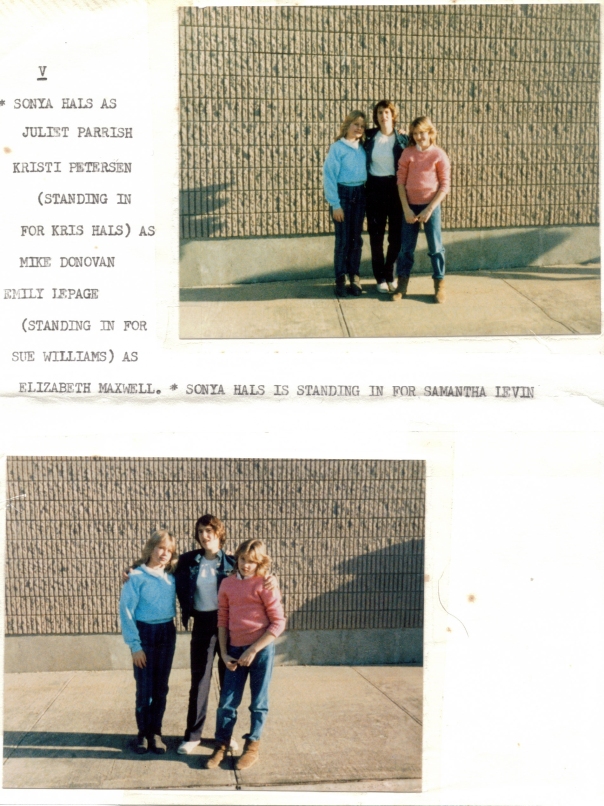 To maintain the momentum, I produced a weekly newspaper (which I did all by hand in colored marker) called The Reptile Republican. I only made one copy of each issue, and it was passed from person to person. There were 25 issues; this is Issue #24. I only have #24 and #25, and thought they were lost to history until I recently reconnected with childhood friend (and Mike Donovan! Ha!) Kristina Hals, who discovered she has the first 23. Considering how much time and effort it looked like I put into these, I’m amazed I was a straight-A student (except for math and gym). And now, here’s Issue 24 in its entirety: 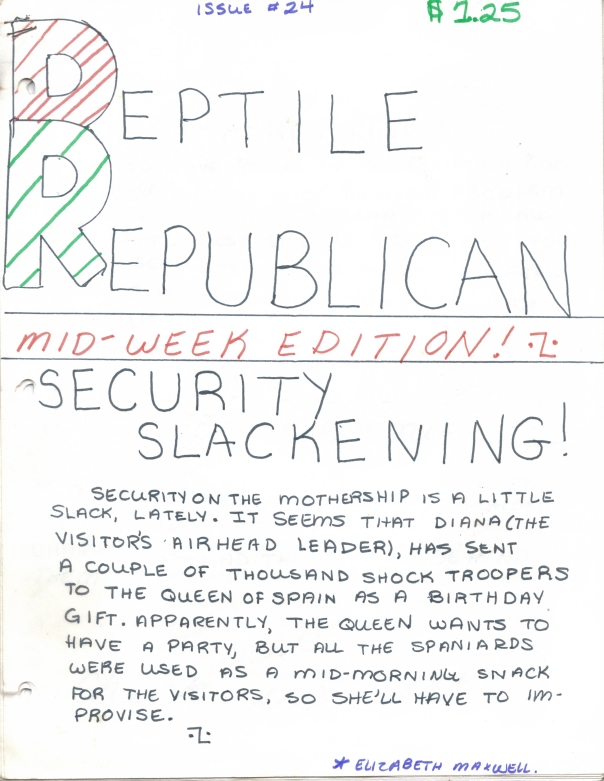 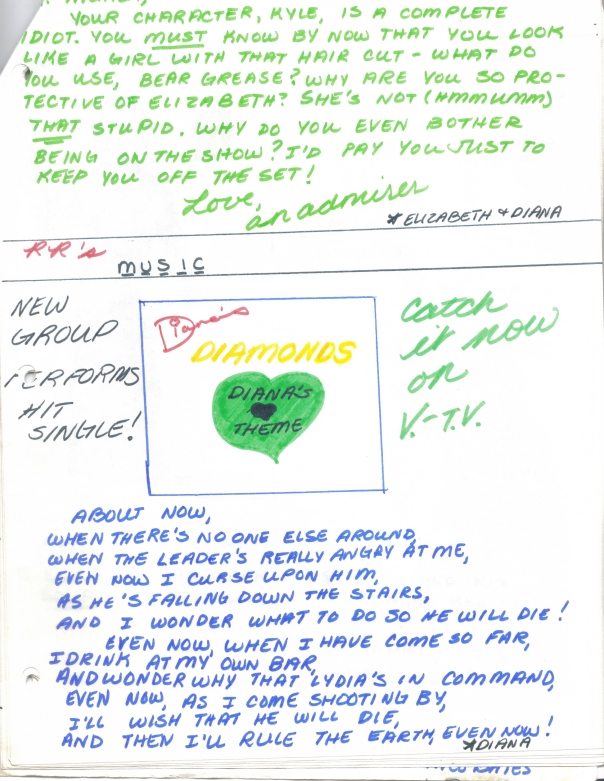 I enjoyed doing Reptile so much I made supplements in between issues. Here’s a card I made, although it’s not clear what it was for (somebody’s birthday? Watch TV this week? I have no idea—I don’t remember): 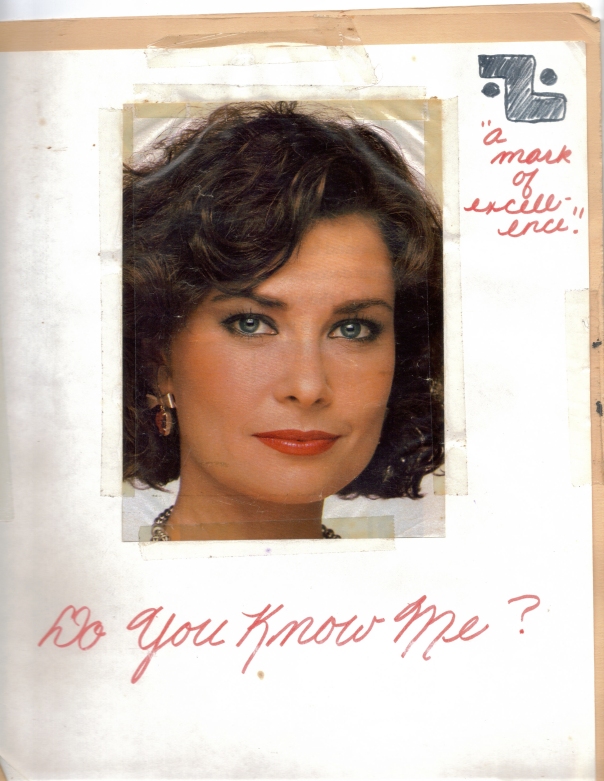 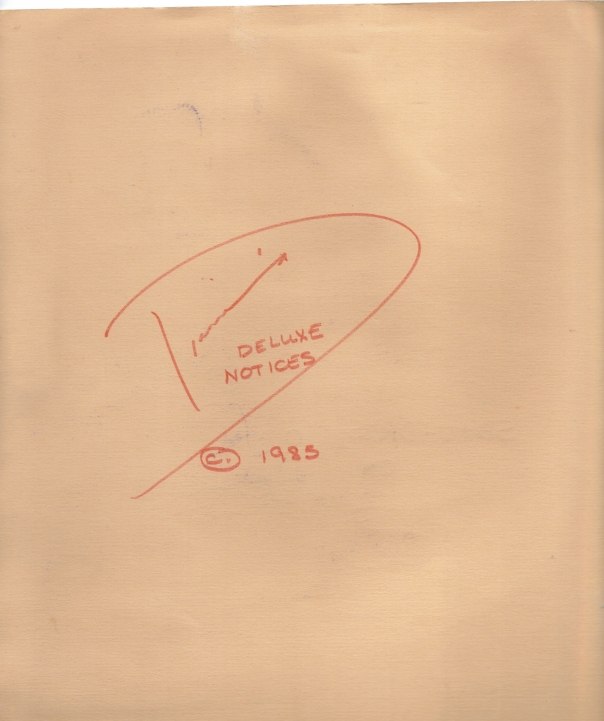 If you’ve gotten this far, then you’re probably wondering what I’m letting go: six of the eleven paperbacks in Pinnacle Books’ 1984 tie-in series (Tor had a series also, but I never owned or read those). I bought each one as it came out. Here is the full list of titles in the series:

V: The Pursuit of Diana

For some reason, I did not read or own The Alien Swordmaster, The Crivit Experiment, or The Chicago Conversion. I don’t remember in what order these books were published, so I could have missed them, or I could have grown beyond V by the time they hit the shelves. Still, these books were an important part of my escapism. They especially kept me going when I was away from my friends, like on weekends or family vacations. 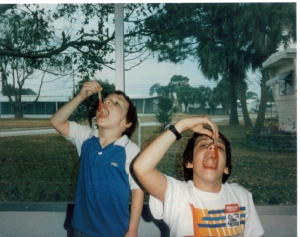 While many fans of the old Friday night V series speak of it with nostalgic disgust, I think it’s true that we often glamorize stuff we watched on TV from our youth, and when we rediscover it in adulthood, we often can’t believe how campy it was. If you’re a V fan who wishes to engage in some of this camp, here you go:

To purchase V: The Original Miniseries

To purchase V: The Final Battle

To purchase V: The Series

To watch full episodes of the series online through the WB, visit here: http://www.imdb.com/title/tt0086822/episodes

And now, the tie-ins with which I’ve parted: 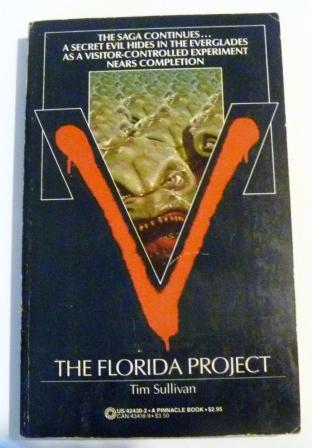 Although I wasn’t a big fan of the books that didn’t feature the original characters, I remember liking this one because it was set in Florida.

I don’t think there was any love-interest in this one, although I don’t recall exactly. I just remember waiting for it with the turn of every page and it never showed up. Anyone know if I’m thinking of a different book in the series?

I remember being disappointed in this one. I just didn’t like the characters and wondered why they didn’t just let the Visitors blow Connecticut off the map. I was really hoping for that to happen in the story, and it didn’t. I seem to remember it took place mostly in Boston, but my memory’s fuzzy. 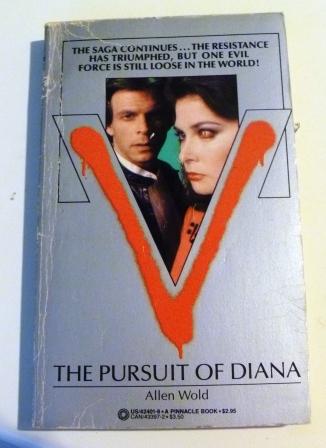 It was a tough decision to get rid of this one. Diana was my favorite character.

There are two that I’m keeping—favorites that are full of highlighting and comments and in the worst shape you can imagine: V and Death Tide. I’ve read those two a few times over the years, and I’m sure I’ll read them again.

[1] In case you’re all wondering? I didn’t care for the new series that debuted in 2009, and here’s why: there weren’t any surprises. We all know they’re not who they say they are—AND we all know everything’s done with CGI. Where’s the magic in that? I made it through the first episode and that was it for me.

Posted on July 19, 2011, in The Goodbye Project and tagged Clearing Clutter, Feng Shui, Goodwill, Hoarders A&E, Hoarding, How to Get Rid of your Junk, Pack Rat, V The Original Series. Bookmark the permalink. 2 Comments.