About The Goodbye Project:

There are so many of us who can’t part with objects because of the sentimental attachment we have to them. You know—the graduation tassels, the barfed-on stuffed animal with the missing eye, the coat your late father bought for you because you begged. So what do you do when it’s time to let go of these beloved items because it’s absolutely necessary?

I’d read someplace that one of the best ways to let go of an object is to know that you have a photo. Sure, you can photograph it before you get rid of it. The Goodbye Project takes the idea a step further: go back and find photos of yourself actually with, using, or wearing that object, and blurb a bit about the memories it invokes.

Why? Everything has a story.

And because of that, the object deserves more than just a hasty trip to the Goodwill or the trash without a second thought. 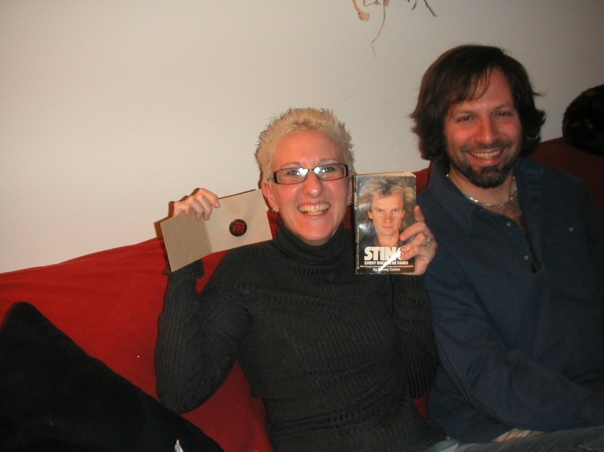 Left, my friend Suzanne Zuckerman poses with a The Police pin and a rare Sting tie-in from the 1980s, December 31, 2006. That summer we’d already made plans to see him live in concert up in Hartford. (At right is her husband Adam, who was also going to go with us).

There’s nothing quite like the excitement of getting tickets to see your favorite band or musical artist in concert—especially when you’re going with friends who either love that band or artist just as much or put you to shame.

My friend Suzanne and I have been Sting fans forever. Although we didn’t meet until we were in our thirties, it turns out we had been fans of the Police most of our lives. In fact, although we had a lot in common, that was one of the things that bonded us—I remember the first song by The Police I ever heard was “Every Breath You Take” and it happened to be featured on an episode of Hunter. I believe her first exposure to The Police was something similar.

In 2007, Suzanne and I got the opportunity to see Sting in concert inHartford,Connecticut—and we were ecstatic. We couldn’t wait for the day to arrive, and had grand plans about getting dinner beforehand and what kinds of souvenirs we were going to purchase. 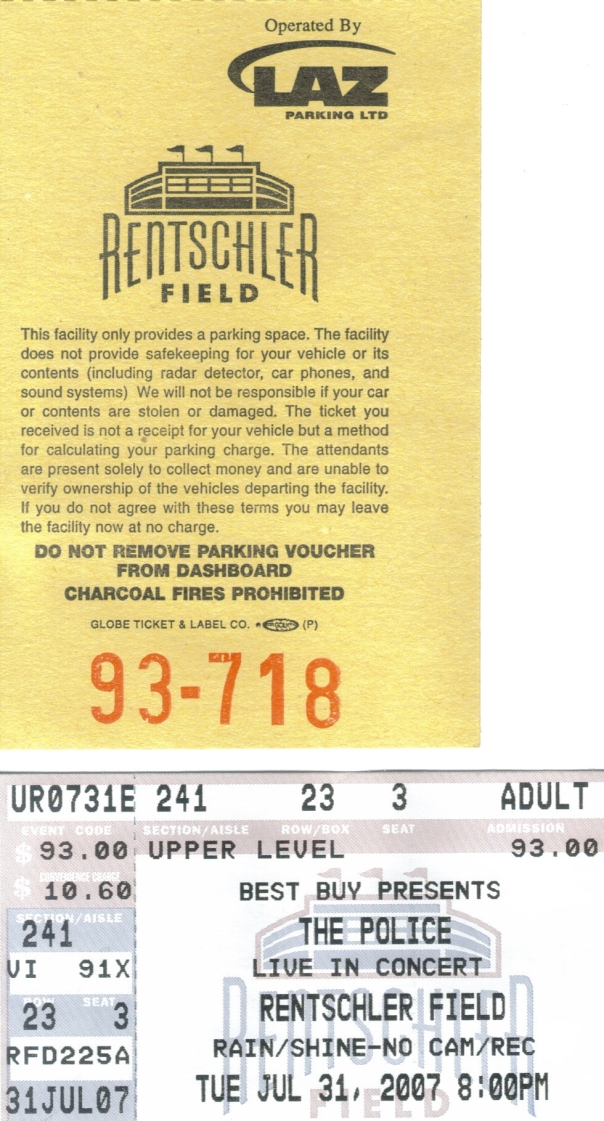 The ticket for the 2007 concert. No, I’m not getting rid of this; in fact, I’m keeping it safely taped into the cover of Sting’s memoir, Broken Music, which I purchased (and had autographed!) at that concert. 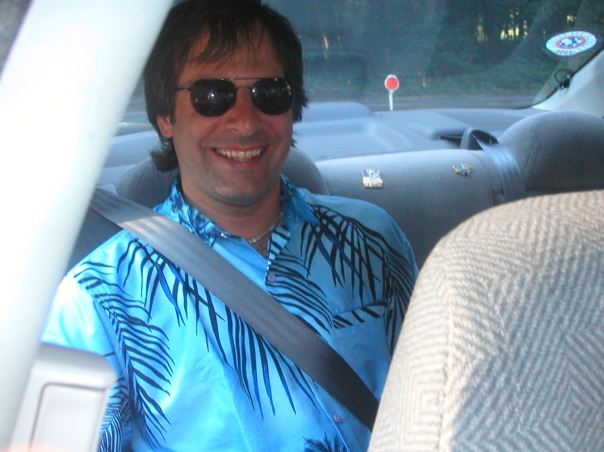 Adam on the way up to the concert. 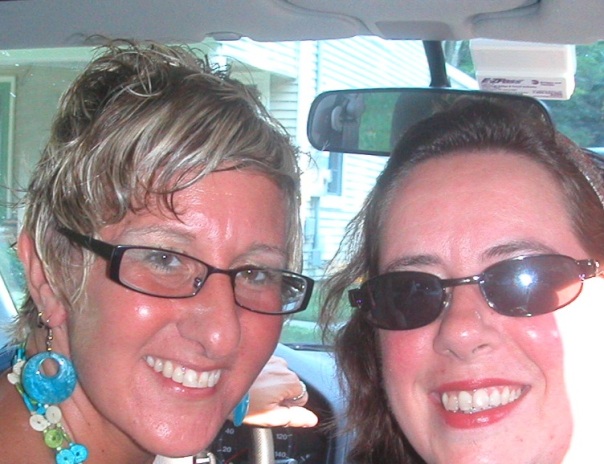 Ready to get on the road: Suzanne, left, and me.

The concert was nothing short of awesome, and there was a special meet and greet set up for the opening act: Fiction Plane, headed by Sting’s son Joe Sumner. Suzanne and I stopped by their table, where they were signing posters. After waiting in a long line, though…they had run out of posters to sign. Although they’d sent someone to get more, Suzanne and I were antsy because we knew that Sting was about to come on stage any minute and we wanted to get back to our seats.

In a moment that was probably beer-inspired, I took off my shirt and told them to sign the back.

They were surprised and laughing about it, but they did it anyway. 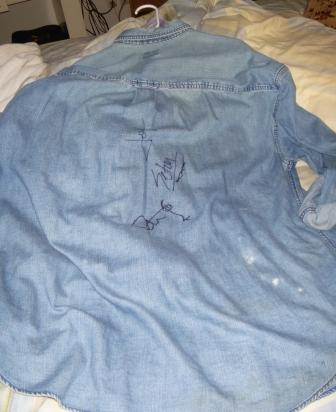 The shirt signed by members of Fiction Plane.

After the concert, Fiction Plane was still at their table—and their stock of posters had been replenished, so Suzanne and I each picked one up. Once I got the poster (which I’m keeping), I realized that, although the signing of the shirt was a really cool memory, I’d never wear it, and it wasn’t like I was going to frame it for my wall.

It hung in the back of my closet until a few weeks ago, when I was culling clothing. Despite its uniqueness, I decided to let it go—I’ve got the signed poster, and now that I have the photo of the shirt, I don’t need to keep it. Why keep something you know you’re never going to wear? 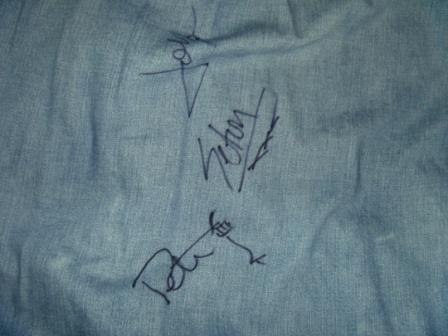 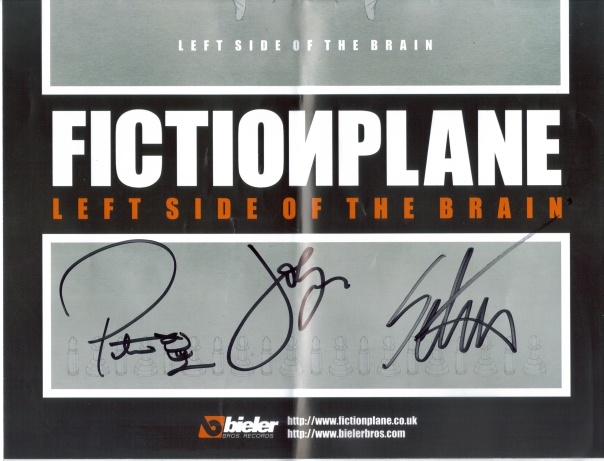 The poster, which I'm keeping. I tucked it into the copy of Sting's memoir, so it's stored with my books.

Posted on August 22, 2011, in The Goodbye Project and tagged Clearing Clutter, Concert souvenirs, Feng Shui, Fiction Plane, Goodwill, Hoarders A&E, Hoarding, How to Get Rid of your Junk, Sting. Bookmark the permalink. Leave a comment.