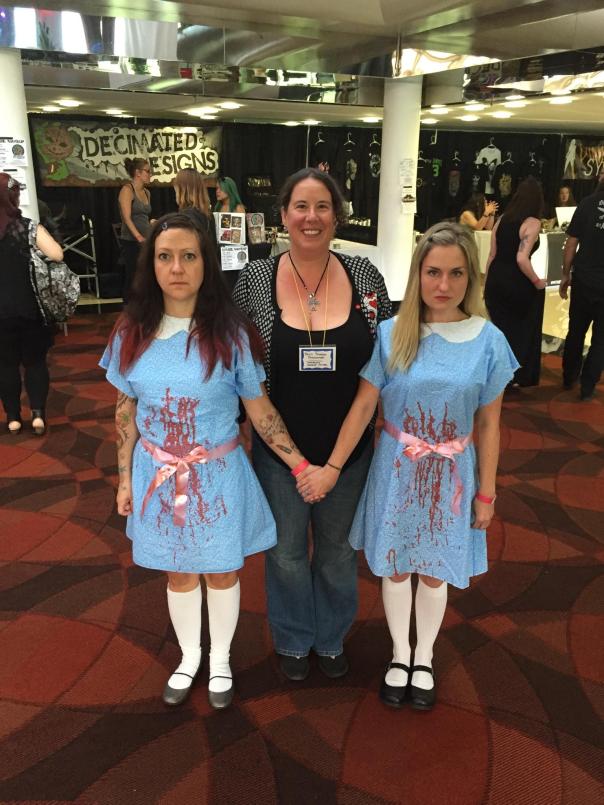 (You can check out the real girls here: https://youtu.be/CMbI7DmLCNI)

I spent yesterday signing books with fellow Connecticut author Stacey Longo Harris at the 2nd annual CT Horrorfest, which was for the first time held in Danbury.

Not only was it a 15 minute drive for me (win!), it was a day full of magic as I saw many old friends and made new ones. I also wasn’t expecting to do so much signing…I even ran out of a couple of titles, and I met readers from not only all over Connecticut, but from New York City, Maine, and even California.

Check out the pix below (and if you want to see just about EVERYTHING, visit their recap page here), and since some of you reading this are con-goers and might be curious, here are my thoughts.

First off, I haven’t been to a horror convention(meaning, one similar to a comic convention, not a writer’s con, which is a different animal) that seemed to run this smoothly. CT Horrorfest is only in its second year, but the folks behind it—The Horror News Network—seemed to do a better job than some I know that have been doing it for a decade. The decorations (which I think may have been provided by Lake Compounce’s The Haunted Graveyard attraction) were spooky fun and lent a feel of cohesion. The programming was broad, well-paced, and evenly scheduled, and the E-ticket panels were at the end of the day, which means the con floor hummed most of the run. I didn’t meet any celebrities, but my husband Nathan visited them, and he noted—as did others—that they spent time with each fan and apparently did not seem rushed. The space in The Matrix (if you grew up here, you knew it as Union Carbide and you might remember one or two of the strange urban legends surrounding it) was gorgeous—well lit by natural sunlight, attractive, and comfortable (I’m going to have a hard time enjoying cavernous, dingy, windowless, concrete-floored venues after this). The variety of menu items and the quality of food (provided by the venue) was outstanding (no plastic burgers here; everything from a full salad bar to sandwiches and chili were just freshfreshfresh). Meals, beer, and wine were available at reasonable prices. The staff was enthusiastic, passionate, and friendly. And those who cosplayed, it was clear, exhibited beyond-the-ubiquitous thinking and had invested heart and soul (and probably more than a few bucks).

All in all, five stars on this one, and I certainly hope it’ll be back here in 2016. It would be nice for us Danbury geeks to finally have something we can brag about! Want to know about the next one? Sign up for their email alerts here (scroll down the page to the bottom):

…and don’t forget, if you’re a horror fan, to keep the Horror News Network on your radar. They are always on top of what’s happening in the genre. 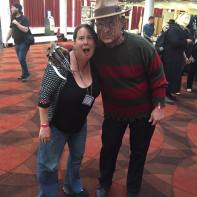 Me and Freddy (there were a couple of Freddies, but the con wasn’t overrun with them, so that was a GREAT change). Photo by Jason Harris.

There were fully animated scares everywhere. The Bloody Mary on the left was particularly creepy. She followed you with her eyes. 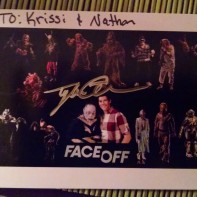 Pretty awesome! We love FACE OFF, and we loved Tyler Green! He is a really nice person. His presentation at the con was nothing short of intelligent and informative. 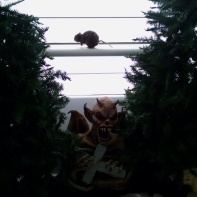 Oh no! It’s a demon in the evergreens! It’s just like New Milford, CT! 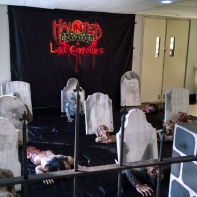 The Haunted Graveyard at Lake Compounce had stuff everywhere. I really liked this display. 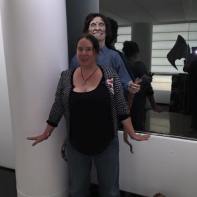 It was fun to wear something that showed my rack. No really, it was. When Stacey posted this on Facebook, she wrote, “See Kristi’s boobs. Only at CT Horrorfest.” Well…I couldn’t argue with that one. Photo by Stacey Longo Harris. 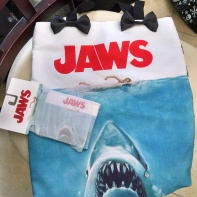 Because I just don’t have enough JAWS crap. The vendors there had such a wonderful variety of things! I got this beach bag, and Nathan got a JAWS wallet, at Necrosuit. Check out their scary inventory at Necrosuit.com! 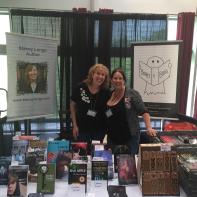 Me and fellow CT author Stacey Longo Harris at the Books and Boos booth. Photo by Jason Harris. 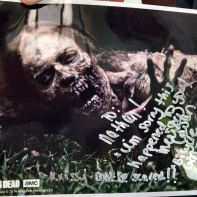 This was another great moment! One of the celebs there was Melissa Cowan, who played the famous Bicycle Girl Zombie in AMC’s THE WALKING DEAD. When I watched the original episode I was so terrified I couldn’t sleep (yes, really) for three days. Every sound, every knock was her, wriggling her way into my bedroom. So…Nathan visited her and told her the story, and she wrote me a special note at the bottom! 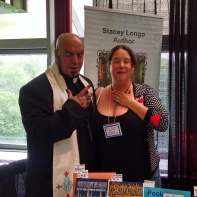 Me and Father Evil. 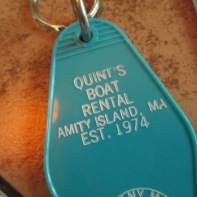 As noted in the prior photo, I do not have enough JAWS crap. 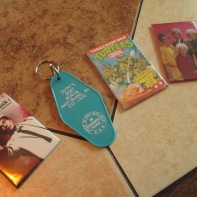 MAGNETS!! There was a vendor there who had such a fantastic variety of pop culture items, all across the spectrum…Kolchak, TMNT cereal I used to buy in the 1980s…and yes, that’s the Golden Girls. I suppose it fits if you think getting old is scary…. 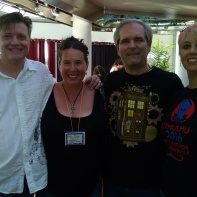 This was an awesome surprise! From left, my husband Nathan, me, and Jonathan Ross and KC Rachuba, longtime friends from area community theatre and huge horror fans. 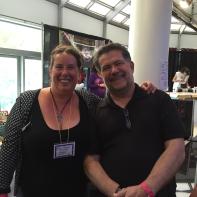 How weird is this? John Mattera is a CT playwright. I was out in the garage smoking a cigarette (he wasn’t, by the way) and we got to talking. He’s a Goddard graduate! Class of 1975. That was such an amazing moment! 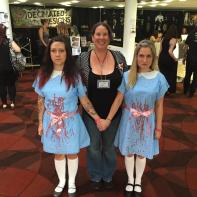