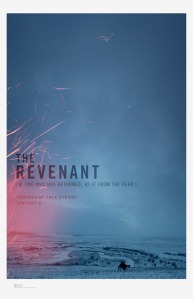 The Leonardo DiCaprio vehicle The Revenant has gotten a lot of buzz—but is it actually any good?

There were a lot of varying opinions regarding this on the most recent episode of Dark Discussions, which is up now: http://www.darkdiscussions.com/Pages/podcast_216.html.

My late father was extremely interested in the Mountain Men and this period in American History spawned by the explorations of Lewis and Clark, so I went into this film with a little bit of knowledge – mostly, though, about keelboats and beaver conservation, to be honest. I’ve chosen what I’d consider reputable resources in case you’d like to know a little more about this fascinating era; perhaps just reading a little bit will whet the appetite.

Everything you need to know about the real Hugh Glass. Seriously, ignore all the ‘real story’ internet articles and start here. There are even extensive lists of resources and further reading.

Museum of the Fur Trade

Museum of the Mountain Man

Provides a pretty decent overview of that period in history. Great if you want a general background; 92 minutes. https://youtu.be/8MYIItApGPA

This is the novel the film was based on.

This one is tough to find, but it, too, tells pretty much the same story as Punke’s book and was made into a film. If you’re desperate, keep your eyes open at library book sales. I’ve seen copies show up there plenty of times because it’s usually a movie tie-in edition and people tend to dump those.

Stunning photographs by the film’s production designer Jack Fisk (and a couple of others). Be sure to read the captions – this is fascinating stuff.

The Daily Mail: “Walk on the wild side: The breath-taking real-life landscapes used in the Oscar-nominated Revenant (including the forest where the infamous bear attack was shot),” by Becky Pemberton

This article does a beautiful job of detailing every single shooting location of pretty much every scene in the film.

Survivalist Ray Mears talks about the film’s level of realism.