← Independent Girl Does the Hula: Why The Writing Life is worth it
Fiction on a deadline: THIS WRITING LIFE EPISODE 14: A KICK IN THE PANTS →

The masthead for DD Episode 341: Hereditary. Collage by Philip Perron

Dark Discussions recently delved into a couple of this summer’s hits–Hereditary and Jurassic World: Fallen Kingdom.

While Hereditary, as is typical of just about every new horror film that comes out, was touted as “the scariest film ever”–and the trailer makes it look like another “scary little girl movie”–it explores grief, loss, trauma, family dynamics and is more disturbing than anything else (I, personally, because of my history, was in a sort of emotional shock when I came out of this film; I could barely drive home). Description from the A24 website:

When Ellen, the matriarch of the Graham family, passes away, her daughter’s family begins to unravel cryptic and increasingly terrifying secrets about their ancestry. The more they discover, the more they find themselves trying to outrun the sinister fate they seem to have inherited. Making his feature debut, writer-director Ari Aster unleashes a nightmare vision of a domestic breakdown that exhibits the craft and precision of a nascent auteur, transforming a familial tragedy into something ominous and deeply disquieting, and pushing the horror movie into chilling new terrain with its shattering portrait of heritage gone to hell.

Hereditary is still in theaters, but will likely leave soon. It’s tentatively due out on disc in September if you miss it. You can watch the trailer here: https://a24films.com/films/hereditary…and listen to our take on it on Stitcher, I-tunes, and on the DD website here: http://www.darkdiscussions.com/Pages/podcast_341.html.

The DD masthead for Jurassic World: Fallen Kingdom. Collage by Philip Perron, which explains why there are bigger photos of Bryce Dallas Howard than there are of dinosaurs…

You can watch the Jurassic World: Fallen Kingdom trailer here https://youtu.be/vn9mMeWcgoM and listen to the DD episode on Stitcher, Itunes, and on the DD website here: http://www.darkdiscussions.com/Pages/podcast_342.html. 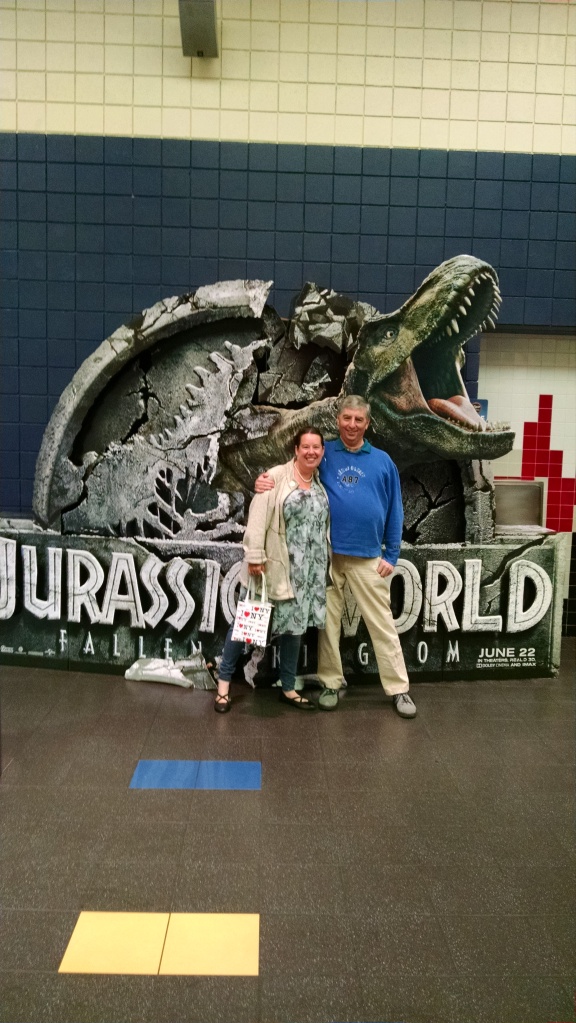 Me and my friend Bruce in front of the Jurassic World: Fallen Kingdom display at AMC Theatres in Danbury on June 23, 2018. Bruce knows all about dinosaurs!!

← Independent Girl Does the Hula: Why The Writing Life is worth it
Fiction on a deadline: THIS WRITING LIFE EPISODE 14: A KICK IN THE PANTS →