← NO VACANCY
THE LAST PEOPLE ON EARTH →

Here in Provincetown, there are lots of birds. Seagulls, mostly, but other species, too, and they always seem to billow en masse from behind the houses across the street from mine—the ones that front the beach. Peter, the next-door neighbor, jokes constantly about how it would be easy, living here, for one to fall into the trap of thinking you’re living in Hitchcock’s The Birds. I thought he was clever and cool, of course, but silly at the same time.

Until last Friday. I drove the other resident, Sigrid, to the airport. It’s just a tiny little strip and building, and although it isn’t far from town at all, once you reach the end of Conwell Street, you are driving through towering dunes and huddling woods. All of it, from what I understand, is natural preserve, complete with walking and biking trails that go for miles.

On the way back, I pulled into a parking lot at one of the trail heads. Of course, the place was deserted, and I decided to take a few photos. As I stood there, camera at the ready, I heard something that sounded like a cat purring, very close to my ear. I looked around, and saw nothing. The “cat” purred again. Was there an animal nearby? It was pleasantly spooky, and I have to confess although it was ten in the morning and sunny, I was having reservations about staying too much longer.

Again, the cat purr. Then, I felt something brush my cheek.

It was a bird’s wing.

Chickadees. There were chickadees surrounding me. In the trees above my head, at my feet, in the beach scrub. The “cat” purring was the sound of their wings. I had never in my life heard what a bird fluttering its wings sounded like up close. There was something very peaceful about it, and intimately creepy at the same time. Sure, they were cute. But the way they were fearless, came so close to my ears, and were overly vocal…I think they wanted me to follow them into the woods.

I chose not to go, and then when I returned to the apartment, there were several of them hanging around outside my slider.

It occurred to me that perhaps Peter wasn’t being silly at all.

Here is the trail entrance,  in case any of you are in P-Town and want to visit the spot.

This is near where I parked. 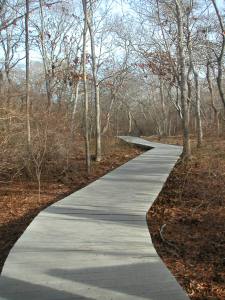 The beginning of the path.

Look at how close they came! 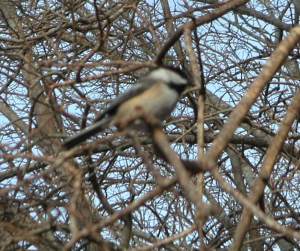 ← NO VACANCY
THE LAST PEOPLE ON EARTH →