…AND I’M OFF TO THE NMWC IN PROVINCETOWN, MA! 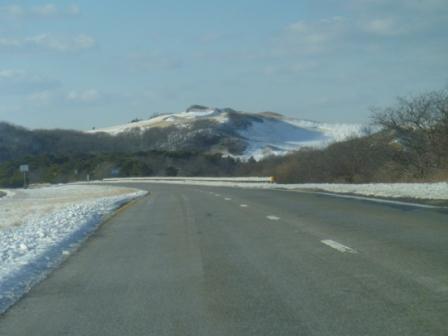 Approaching Provincetown on Route 6, January 15, 2011, at the start of last year's residency. I can guarantee this year there won't be this much snow...it's going to be beautiful!

I’m officially on my way to the Norman Mailer Writer’s Colony inProvincetown,Mass.(if you’re reading this between 10 a.m. and 2 p.m., then yes, I am really in my car). I’ll be there today through February 15.

Provincetownhas something about it that’s conducive to creation, especially (at least for me) in the depths of winter. While up there I plan to spend most of my time producing new short work and revising old short work (I’ve really fallen behind). Normally, I’m there the last two weeks in January; this year, it was moved to February, which means I’ll get to spend my birthday up there as well.

Wish me luck…I’m looking forward to a productive, yet stress-free, couple of weeks! If anyone needs to reach me, I’ll be available on my cell phone and through e-mail (though I’m really going to abstain from that as much as I can).

Talk to you soon!