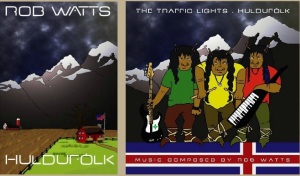 We’re pleased to feature Rob Watts, author of Huldufolk—the first in his quartet of paranormal books called The Crooked Roads through Cedar Grove—tonight at 6 p.m. on Scary Scribes. We’ll not only learn all about those hidden creatures of Iceland, we’ll get an exclusive sneak peek of the second book in the Cedar Grove quartet, Crabapples!

Rob grew up in Boston, Massachusetts, and has degrees in Culinary Arts and Hotel/Restaurant and Travel Management. After a long career in the culinary industry, he spent a lot of years researching and writing on the subject of Boston’s historical music scene. Rob is also a musician—and he’s combined his music and love of travel to places such as Switzerland, Sweden, France, Iceland, Denmark, Kiribati, Mexico, The Caribbean, all over the U.S. and Canada and so on—with his thriller writing, and thus each book in his series The Crooked Roads through Cedar Grove will feature an accompanying CD of original music. Find out more at www.robwattsonline.com.