Waiting for the other shoe to drop.

Who hasn’t lived life like that sometimes? In the circumstances in which I grew up, “waiting for the other shoe to drop” was just part of life. From my earliest memories, it seemed, I was always waiting for things to end badly–for that proverbial shoe to land, so to speak, in a very bad spot.

For that reason, there was a story I read when I was very young (probably ten or so, perhaps younger) called “Obstinate Uncle Otis,” which I never forgot (I’m doing this spoiler-free, because I’d like you to go read the story, so I’m not telling you why).

That said, I remembered how the story concluded (almost to the line, it turns out later), but it made such a strong impression on me I remembered the title. I didn’t remember who wrote it or the plot, but for me, having a title is the most important thing, since ninety-five percent of the time I can only recall one of my own mental images that went with what I was reading or what really impressed me and that’s about it.

Over the years, I had cited this story many times and how it ended to friends, mostly when we’d be sitting around talking about learning how to defeat anxiety, and I always wished I had a copy of it. Searching in old anthologies or textbooks from the era was a dead end: I hadn’t read it in an anthology—the story was part of a reading-box system, in my opinion a very effective way of teaching reading to a large group of students, because each could advance at his own pace and therefore benefit no matter what level at which he’d entered the class.

Basically, each classroom was issued several file boxes. Each box was colored and represented a reading level; for example, the orange box was Level 1, the yellow was Level 2, et cetera. Here’s a current photo of what one of these systems looks like today; I found it on a UK website, so apparently, this system is still being used someplace, although it looks like they just do one box now for the whole system: 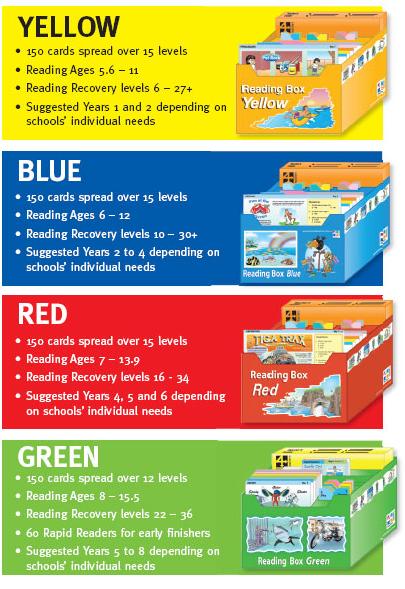 Each box contained cards the size of manila folders. Each card had a short fiction piece accompanied by comprehension and vocabulary questions. Each student progressed through the boxes at his own pace (during “reading time” each day—we weren’t allowed to take the cards home), and when he’d successfully completed one box, he moved up to the next level.

The system we were using had many levels, I want to say eight or ten, possibly more. All I remember is that once you got up into the dark colors—navy, olive, plum, brown—you were advanced. “Obstinate Uncle Otis” I believe was on a navy card (but you know what they say about persistence of memory, it’s just that’s the color I’ve associated it with over the years). And if anyone’s assuming I was a brain and made it all the way to the last color, I didn’t. I fell three short, as I recall.

For a long time, therefore, my search for “Obstinate Uncle Otis” focused on trying to find the system we’d used. To no avail. Eventually, I gave up and just started searching for the story itself online, again, to no avail. But one thing I’ve learned over the years is that if you’re looking for something specific on the Internet and can’t find it, wait awhile and try again. So every couple of years I’d Google “Obstinate Uncle Otis” and keep my fingers crossed.

This past January, I found it.

“Obstinate Uncle Otis,” by Robert Arthur, was published in Argosy’s July 19, 1941 issue. Someone had, in between my search periods, PDF’d all the old Argosys and archived them online. Imagine how thrilled I was to see this: 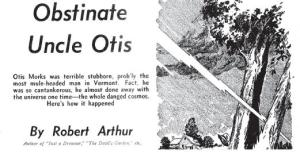 So, I think it’s safe to say the other shoe has dropped–for once, in position I like. I give you “Obstinate Uncle Otis.” Just click the link and go to Page 33. Enjoy!