← How cool’s this? Vote for your fave SECRET THINGS trailer, win a copy!
NaNoWriMo 2013: Want to Write a Novel? →

That little thing called coincidence makes you wonder, doesn’t it? Sometimes it can be downright scary (good fun, that is!)

Me and Moira the Banshee at Blobfest 2013.

This past July 12 & 13, I went to Blobfest in Phoenixville, PA (see a neat video montage of the entire experience here). There, I met a troupe of actors called the The Patient Creatures. One of their members, Moira the Banshee, was in charge of the screaming contest. I’m not sure how it happened, but after the event and the run-out, we were all standing around outside talking about the screaming contest and I sheepishly said I can’t scream very well (I can’t. At least not in high-pitched scream-queen style). She challenged me to a screaming duel. 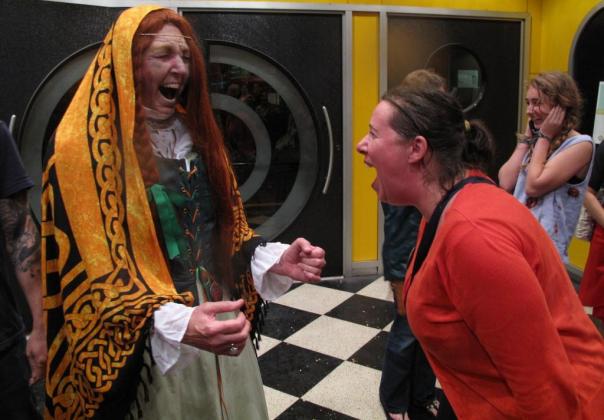 We must have been pretty loud—check out the girl behind me on the right.

Fast forward a week to July 19, and I’m at NECON, the Northeastern Writers Conference. There was a woman there I vaguely recognized, but couldn’t place her. I had seen her nametag indicating that she was writer P.D. Cacek, who’d written several fantastic horror novels. I knew who she was and had read some of her books over the years, but had I ever met her? No. I was sure that I hadn’t. Other than around the campfire the previous two nights, anyway.

Come Sunday morning, we were in the cafeteria having breakfast, and she was talking with some other friends of mine. The subject of Blobfest came up, and she said “I was there, too!” I said, “You were?” She laughed. “I was the Banshee!” What a moment! I guess she recognized me first and wondered if I was going to figure it out.

For fun, we took some pix of us…and recreated our “screaming duel”…NOT dressed up! 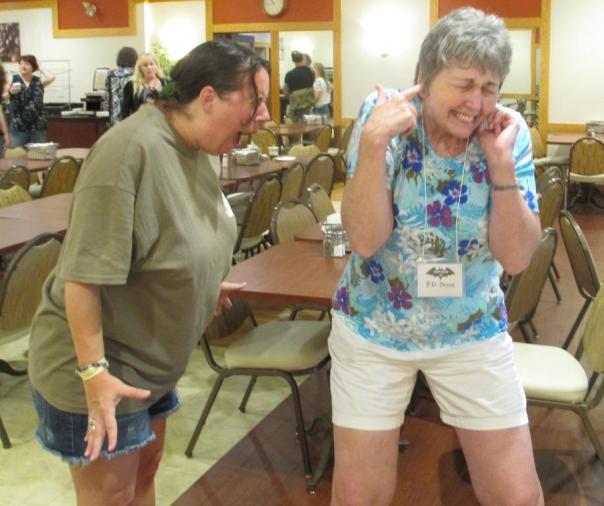 ← How cool’s this? Vote for your fave SECRET THINGS trailer, win a copy!
NaNoWriMo 2013: Want to Write a Novel? →