← Review: Apocalypse Z: The Beginning of the End
Stopping by Woods… →

The Quest for Corn Bran

On Christmas Day, my sister and I were both up early. We opened our gifts to each other while on the phone and laughed about some of our best—and worst—Christmas Day memories. I don’t even know how we got on the subject, but we started talking about a cereal I loved when I was a teenager: Corn Bran (seriously, I’d sit there after school and plow through a box while I watched re-runs of GI Joe, Battle of the Planets, and Jaws on VHS). Back in the mid-1980s it was a new product, and I still remember the gingham box with the thick brown writing, which looked something like this (I think this is a newer version, because honestly I don’t remember the word “crunchy” being anywhere on it, but you get the idea):

I mentioned to her that it would be awesome to be able to have that cereal again, and neither of us was sure Quaker still made it (after all, remember Teem soda? Shark Bites? Hi-C Ecto Cooler? Check out more extinct faves here: http://www.buzzfeed.com/daves4/25-foods-youll-never-eat-again). At first, we had this crazy idea—I’d put a call out via my blog and say that anyone who could find me a box could mail it to me and I’d send them a free copy of one of my books or anthologies in which one of my stories appears. But thanks to the power of the Internet, we didn’t need to do that: we were able to get our answer right quick: “Yes, they do! And oh my God,” said Missie, “they sell it here in Austin at my Target!” (Austin’s so huge there are more than one of any given chain—in Austin there are ten Targets. People there say “my” Target, or “my” HEB, or “my” whatever).

The day after Christmas, off she went. She had a friend take her picture with the box in the store and texted: “It’s really true! And guess what, the site says they sell it at your Target in Bethel!”

We made a plan: I’d get a box too, and then we’d sit down and have breakfast “together” on the phone—to see if it really WAS the same stuff; neither of us remembered it being called “Corn Bran Crunch,” and we were skeptical they hadn’t “jazzed it up” over the years. After all, when I got my box at the Target, the pieces depicted on the box cover looked much lighter in color than I remembered.

January 2 came and we prepared to eat breakfast together. Enjoy the video!

So now that we’ve found Corn Bran, what’s next? I was certain that another much-loved snack from my past—Gerber Baby Pretzels—still existed, but no luck so far; I’ve found few references to them anywhere.

What’s your favorite nostalgic or childhood snack that you either miss or wish you could have again? Here’s one of mine that I know is long gone: 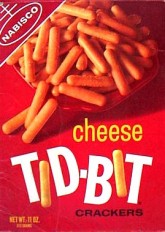 ← Review: Apocalypse Z: The Beginning of the End
Stopping by Woods… →