Come Conbust It this March!

Me with members of the Salem Trayend Band, who presented a Civil War era bayonet fencing drill practiced by the Salem Zouaves. To learn more, visit http://salemtraynedband.org/

Conbust isn’t just an anime con — it covers everything from writing (in all genres and styles) to gaming, filmmaking, art, television shows, podcasts, and more; its variety of programming is outstanding. While it does include the staples (if you’re unfamiliar, some examples: Women in Horror, How to Get Published, Character Building, Cosplay 101) for those who might want them, last year it was refreshing to get a dose of some of the following: Interstellar Governments; Romance, Eroticism, and the Demon Lover; Women of Doctor Who; Editing Movies: How Not to Do It; and Nipple Eating Mutant Starfish (The Best and Worst: a discussion of awful B-movies).

Conbust is one of those cons at which everyone can “get into” something…and for $30 at the door for the weekend (or $25 to pre-register), you simply can’t beat the price.

Conbust 2015 will take place Friday, March 27 through Sunday, March 29, 2015, at Seelye Hall at Smith College in Northampton, Massachusetts. It’s easy to get to, and there are plenty of affordable hotel accomodations nearby. A full weekend pass for the general public is $30 ($25 if you preregister by snail mail before March 7). For more information and to register, visit http://sophia.smith.edu/conbust/index.html

In the meantime, you can enjoy this brief look at my experience with Conbust 2014 below. 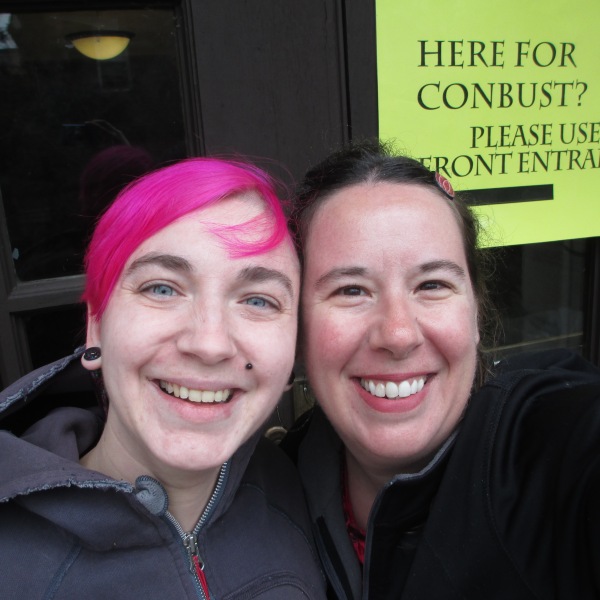 I met so many cool people, among them artist Eleanor Perry! We can’t wait to hang out again this year (as she noted on Facebook, “there we are using the side door #rebels”! 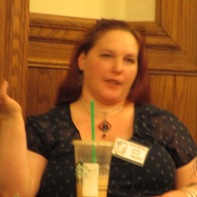 Broad Universe member Jennifer Allis Provost (author of Copper Girl) notes that when she saw the first STAR WARS in theatres, she was five and was terrified Darth Vader was “going to hurt the pretty lady.” 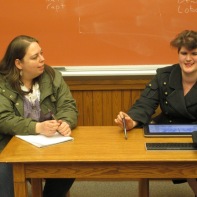 Trisha J. Wooldridge, current President of Broad Universe, and artist Kelly Turnbull discuss “Getting into the Indusry: Women in the Nerd Business” on Friday night.

Trisha J. Woodridge, author of THE KELPIE, at the “Getting into the Industry: Women in the Nerd Business.” 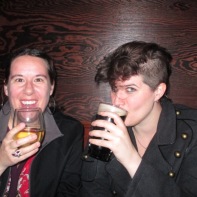 Me and artist Kelly Turnbull wind down.

The hotel where I stayed — The Quality Inn — had an awesome free breakfast! I love those waffle makers (notice pile of bacon in background — hey, I needed my strength!).

This coffee shop is near the campus — well, it’s a little bit of a walk, but boy, did I get some super great coffee.

Trisha on the “Women in SciFi & Fantasy” panel. 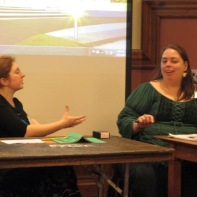 Trisha and ML Brennan (author of GENERATION FIVE) on the “Women in SciFi & Fantasy” panel. 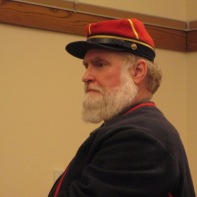 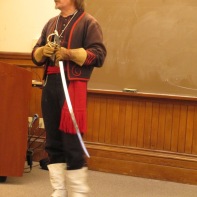 Me with members of the Salem Trayend Band, who presented a Civil War era bayonet fencing drill practiced by the Salem Zouaves. To learn more, visit http://salemtraynedband.org/ 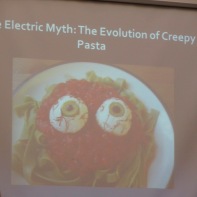 One of the coolest things about Conbust is its variety of programming. This primer I attended on Creepy Pasta — something with which I was familiar because of my niece but had never had time to explore — was a WIN for me!

I was lucky enough to serve in the Character Building 101 Workshop alongside well known speculative author http://www.brucecoville.com/books.asp! He is awesome!

On Saturday night, we went to the Northampton Brewery for food and drink. Nice place, great conversation! 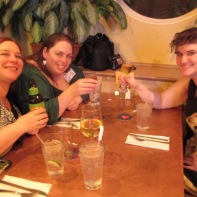 These nachos rocked! I hope we go to this restaurant again because I’m already looking forward to them.

My hotel — the Quality Inn on Conz Street — was quite nice; in fact, I’m staying there this year as well. They had a beautiful fishtank in the front lobby.

The Broad Universe Rapid Fire Reading on Sunday morning. Trisha read a section from her book THE KELPIE; Jennifer read a section from her novel COPPER RAVENS. I read the first couple of sections from my short story “Jarring Lucas,” which is included in the Great Old Ones Publishing anthology CANOPIC JARS. One of the attendees was desperate to read the rest (that was an AWESOME moment!), so I gave her my copy.

A gorgeous tattoo on Emily.

If you know me you know I always document my hotel accomodations…here we go, my room at the Quality Inn on Conz Street in Northampton. It was a cozy room. 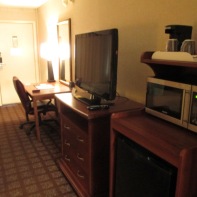 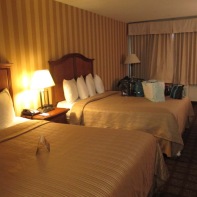