The full-page ad that appeared in TV Guide. Those old ads were very effective in enticing people to watch things. I don’t think ads today have the same kind of power.

In 1978, the ABC Friday Night Movie aired The Bermuda Depths. It was billed, in the original TV Guide full page ad, as a frightening mystery surrounding the Bermuda Triangle—a hot topic back in the In Search Of-cryptid-paranormal-UFO-obsessed decade that was the 1970s. I didn’t know this then, but it was written by Alan Rankin, produced by Jules Bass (yes, the Rankin/Bass behind Rudolph the Red Nosed Reindeer) and directed by Tsugunobu (Tom) Kotani of 1977’s The Last Dinosaur fame—which meant creatures and creepy imagery, and it would certainly deliver. 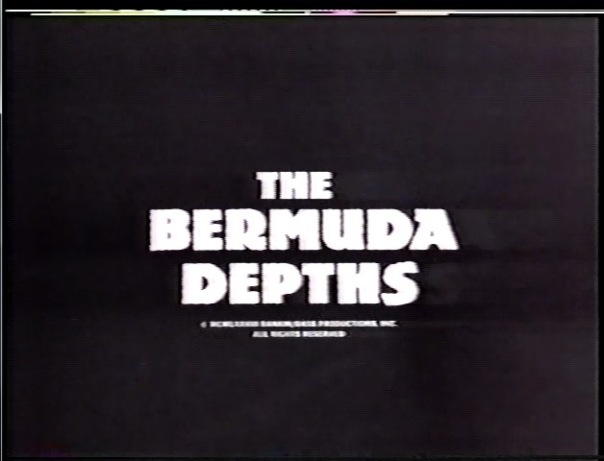 THE BERMUDA DEPTHS is a Rankin/Bass production that aired in 1978.

In the 1970s, my family had a pop-up Coleman Camper—a Valley Forge, for those of you who remember Coleman’s series named after battles of the Revolutionary War (remember, it was the bicentennial decade). When we weren’t using it at a campground, it was set up at the top of the driveway for use as a sort of “playhouse” and “summertime sleeping area” for us kids. The gas wasn’t hooked up, but there were extension cords running from outside plugs on the house providing electricity. There was also a nine inch black and white TV with “rabbit ears.” We got three channels—not very clearly—and one of them was Channel 7, the ABC affiliate. My brother and I popped popcorn and got ready to watch.

After we did, I was pretty sorry. We slept in the camper that night, and every noise in the woods woke me up and freaked me out.

This was shot from the viewpoint of something sinister coming up from the sea, climbing the cliffs beneath it; it was intercut with shots of Magnus’ father tucking his sleeping boy into bed. As the unknown “creature” got closer, coming up as high as the porch and even into the house, there were the sounds of crashing waves and what I now know are the vocalizations of whales, but it made for one hell of a creepy montage to a seven-year-old. I remember looking away from the television because I was afraid to see what the creature looked like. 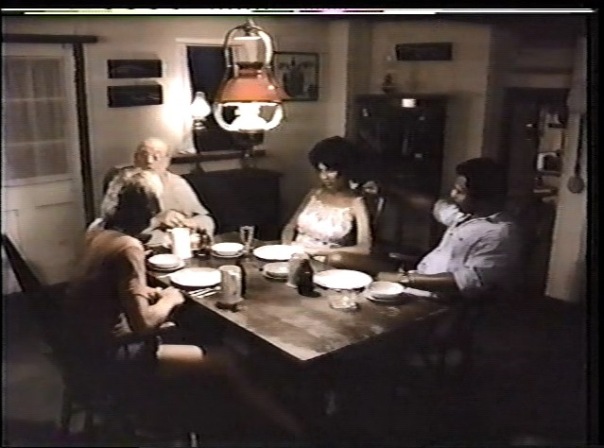 I remember holding my breath during this dinner conversation, with Burl Ives (2nd from left) telling his guests, “Teratology…it’s a branch of anatomical science which treats the abnormalities, or the unusual growth in the structure of animals. That’s what we’re doing down here…Eric and I…trying to find evidence of unusual life.”

What’s really odd is that this program, according to multiple sources, aired in January of 1978. We wouldn’t have had the camper set up outside at that time, as it was winter, but I clearly remember watching this on the small red TV outside. So two things are possible: A, it’s persistence of memory—meaning I’m confusing this with another film that scared me which aired in the summer, and I DID watch this, but on our television indoors; B, it aired a second time in the summer—which would’ve been possible even if I can’t locate a record of that. For you young’uns, there wasn’t a whole lot of new programming on in the summer. Series seasons, television premieres of theatrical films, and original movies ran from September through May or June, and in the summer, it was all re-runs. ABC very well could have aired this that summer.

This is the image that burned into my brain and stayed there for many years; it was the thing that kept me searching for this film. I was so terrified by this I literally couldn’t sleep. “You’ve been had,” says Dr. Paulis. “THIS is a Jennie Haniver.” It turns out—although I didn’t know it then—that a JENNY Haniver is a real thing—it’s a ray or skate carcass that has been manipulated and dried. Sailors in the 16th-century claimed they were mermaids and sold them to tourists; think early version of the Fiji Mermaid. 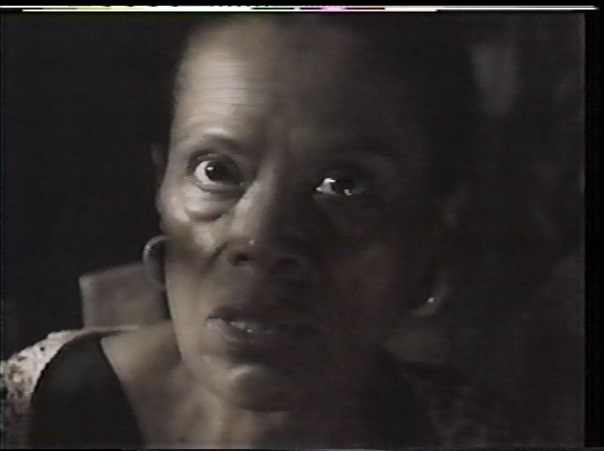 In this scene, Delia—Dr. Paulis’ housekeeper/cook who clearly has some voodoo thing going on—regales Magnus with the tale of Jennie Haniver, a beautiful young woman who sold her soul to the Devil who now swims in the depths forever. “Oh, we all know her. She been with us a long time. Some see her as a little girl. Others as a young woman. And even those who say they’ve seen her swim like a serpent.” Delia’s words are voiced over a flashback of Jennie’s horrific story rendered in Rankin-Bass style models, complete with tumultuous ocean water that, today, looks like blue Jell-O—but back then looked pretty awesome, especially on a small black and white TV.

Like many of the commenters on the Kindertrauma entry for this (check it out here: https://www.kindertrauma.com/the-bermuda-depths/), this movie and its scary imagery haunted the back of my mind for years, like a half-remembered nightmare. Although I was certain that I had indeed seen a movie, I couldn’t remember the name of it, anyone who was in it, or what it was about, except for some scary monster from the sea.

Magnus and Jennie go into the remains of Magnus’ home. I remember being fascinated, trying to imagine what the place must have looked like in its heyday. I’d like to pinpoint this as something that inspired my love of abandoned places, but I can’t be sure; it seems like that passion has always been there and probably pre-dated this movie, although I’m sure these images at least contributed.

Our very first glimpse of the terrifying giant turtle (top), which scared the crap out of me – because, of course, you can make out the same face that graced that terrifying doll Burl Ives showed earlier.

In 2002, I started work on a complete catalog of sea creature movies. I wanted to track them all down and own them. Keep in mind, this was still in the very early days of DVD, so most things were still on VHS. It was the early days of Amazon, the early days of Ebay, the early days of the internet (it’s certainly not the information playground it is now). Email was unreliable, and if you ordered something, you honestly didn’t know when (or if) it was going to arrive. In fact, many times, you had to order something online and then mail a check to the person or company or call them on the phone to give them your card number. I’m really not kidding.

Terrifying turtle eyes. In this particular moment, the Japanese Kaiju influence can clearly be seen. I was a huge fan of the all of the Godzilla films at that time in my life, but I didn’t see the similarities until now. Note: I’m not sure they were called “kaiju” way back then, and if they were, that certainly wasn’t on my radar—they were just referred to as “Godzilla movies” even if the big G himself didn’t make an appearance.

At any rate, to help me in my search, I bought a book at my local Borders (this was not only before they went out of business, but a couple of years before their shelf-stock became extremely poor—I could go there and find a book on just about anything; it was better than the library). I bought Creature Features: The Science Fiction, Fantasy, and Horror Movie Guide, by John Stanley, and I read the whole thing cover to cover (interested? Check it out here: http://a.co/4Q6b2xh). There were a few entries that caught my eye, among them this one: 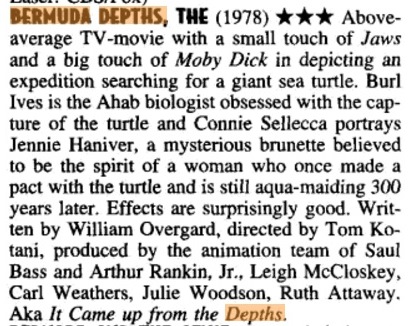 The film’s listing in CREATURE FEATURES by John Stanley.

It was the giant sea turtle that made me think this could be the film I was looking for, and the timing was about right. I remember calling my local video store, where I had a lifetime membership, to see if they had it, which they didn’t. I did turn to the immature internet (back then if you had it at home it was kind of big deal; I did) and I managed to find someone who had VHS copies for sale (I bought Barracuda from the same guy), I think on Ebay. Here’s a photo of the videotape he sent me, which I JUST converted to DVD and tossed recently. 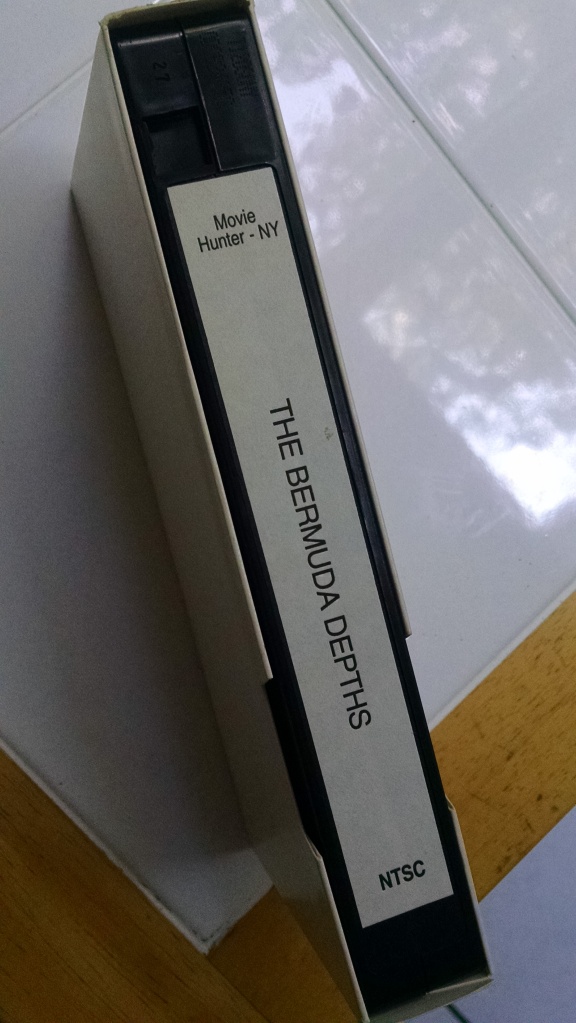 The videotape I bought from someone on a very early Ebay.

Sure enough, it was the movie I remembered, but A, it wasn’t at all scary, and B, the ending was lame. Ahh, persistence of memory. But in a recent re-watch, I’m thinking I might be able to do something with the whole idea of a Jenny Haniver—even if it’s just telling people about it at the Ray Touch Pool at the aquarium.

A Jenny Haniver, sold to tourists by sailors as far back as the 1500s. They were usually fashioned of skates/rays, but occasionally, other sea life would be used.

On one lasting note—in poking around looking for stuff I found a listing on IMDB for a film called Back from the Bermuda Depths, with the same tagline as the original (info on that is here: http://www.imdb.com/title/tt4040660/). It’s still in development and has a release date of 2018. Who knows? Interesting to think about, though. That WOULD be cool and I’m sure many of us who were traumatized by this film wouldn’t miss it!

This would be crazy if it really happened!