The Extinct Species Graveyard at the Bronx Zoo’s BOO AT THE ZOO Event was fascinating–and sad.

Nathan and I love to visit the Bronx Zoo, which is just about an hour from our house—it’s like being on vacation for a day, and it could be said the zoo is part of our lives (we’ve “financially adopted” many of their animals over the years, everything from a bat to a Madagascar Hissing Cockroach we named Mountain King). Since we’re members, we try to make it down for the zoo’s special events throughout the year.

October brought Boo at the Zoo: weekends full of activities such as a beer garden, pumpkin carving demonstration, not-really hay rides, marshmallow roasting pits, candy trails, a corn maze—and my favorite, a Haunted Forest in the abandoned World of Darkness Building. Little known fact about me? It was my first-ever walk-through Haunted House, and I did pretty well!

It was lots of fun to see kids in costume.

Look who I ran into in New York City!

…and to visit our hissing cockroach, Mountain King. 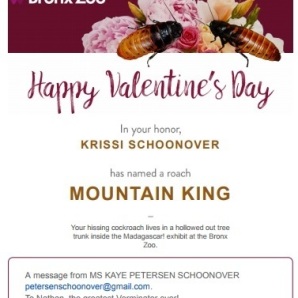 My Valentine’s Day Gift to Nathan

Check out Mountain King! He is clearly aptly named. Look how large he is compared to the others, and a spectacular gold color (which you can’t really see in this terrible light).

The exhibit that struck me most was the Extinct Species Graveyard, which was set up in a little-used grove of trees next to The Mouse House. It wasn’t there for a Halloween thrill, nor was it there as just another decoration to fill up space; it seemed part educational, and part memorial. I was surprised by the profound sense of sadness I felt as we wandered through the headstones. 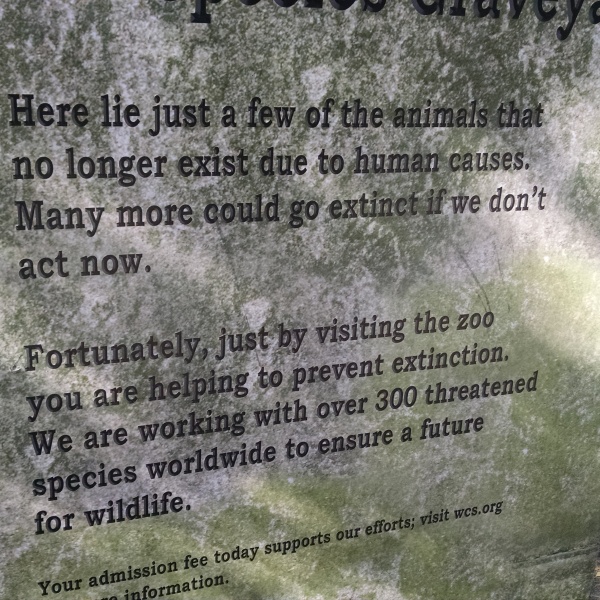 The graveyard was located on a perfect, flat, shady — and unused the rest of the year — spot next to The Mouse House.

The area where this was set up made it feel real. 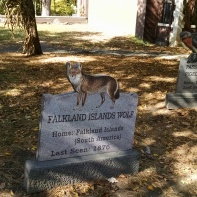 Officially discovered in the late 1600s, the Falkland Islands Wolf’s tame nature spelled its doom—it hadn’t learned to fear humans, so settlers could easily trick it into coming close enough to kill it. They were hunted for meat and fur, and were considered threatening to sheep. The last one was killed in West Falkland in 1876. For a thorough history (that looks to be well-researched—loads of legitimate sources, here), visit http://messybeast.com/extinct/warrah.htm 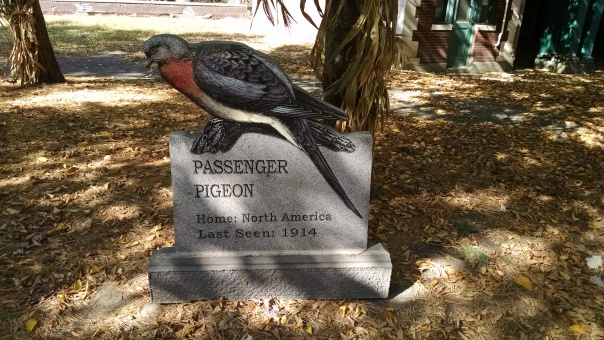 Passenger Pigeons were abundant in the 19th century, and tales of their titanic flocks—they took over entire forests, appeared thick as waterfalls, and left entire towns blanketed in feces—are just plain hard to believe. They were basically hunted out of extinction, both for their meat by starving frontiersman, and because they were a nuisance: they competed with farm animals for foodstuffs, among other things. Once the railroads came into being, there was no stopping hunters and trappers from sporting these animals right out of existence. The last known Passenger Pigeon’s name was the Cincinnati Zoo’s Martha, and she died in September of 1914. For more information, check out Audubon’s “Why the Passenger Pigeon Went Extinct” here: http://www.audubon.org/magazine/may-june-2014/why-passenger-pigeon-went-extinct 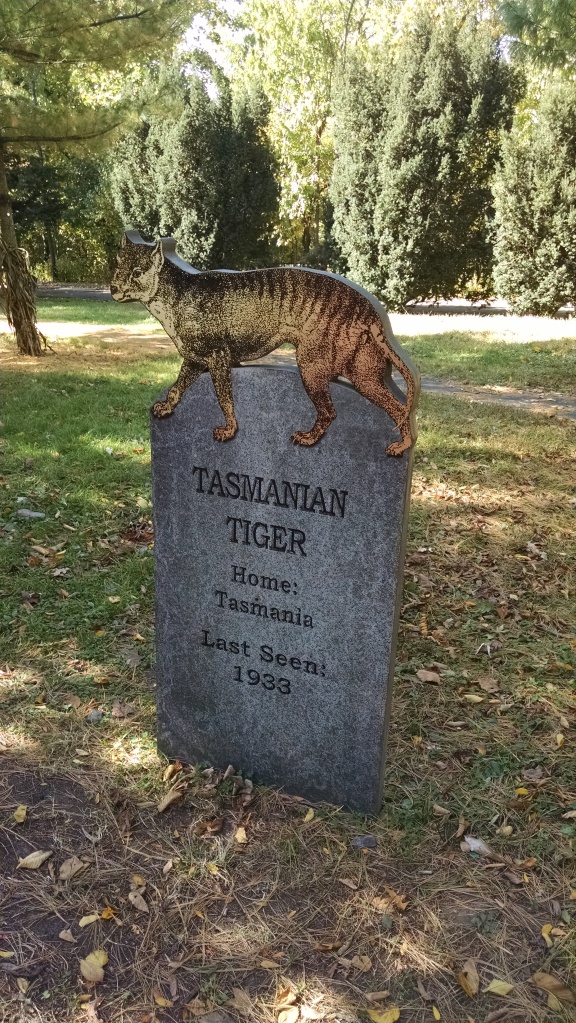 The Tasmanian Tiger was killed off on the Australian mainland by widespread hunting, but survived on Tasmania until the last one died in a zoo in the 1930s. Australians haven’t given up on the hope that this thylacine is still alive, however—to this day, reports of sightings are frequent, and even a recent episode of Expedition Unknown had Josh Gates out hunting for it. Initially, scientists had proposed many theories for the creature’s extinction on Tasmania, although there is new evidence to suggest that it was a changing climate that was the culprit http://www.telegraph.co.uk/news/2017/09/28/mystery-disappeared-tasmanian-tiger-finally-solved/. 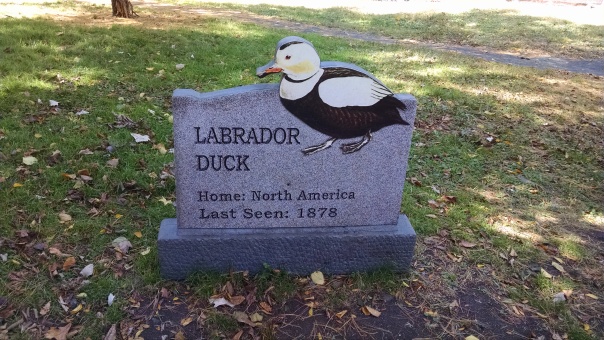 The story of the last authenticated Labrador Duck’s demise is rather sad http://www.chemunghistory.com/pages/labradorduck.html, but literally, almost nothing is known about this bird—its breeding was done in such remote areas (it’s suspected way up in Greenland) that it died out almost before we noticed. Apparently once prevalent on Long Island Sound, we do know, thanks to a journal called Arctic Zoology in 1785, that a specimen was sent from Connecticut to England (see where I got this from here: https://birdsna.org/Species-Account/bna/species/labduc/introduction). Not very exciting, but there is one ornithologist who made it his mission to visit every single specimen (there are 55) left in existence, which he details in his book The Curse of the Labrador Duck. https://www.smithsonianmag.com/science-nature/the-curse-of-the-labrador-duck-16641319/

Probably the poster child for extinction, the Dodo Bird has something in common with the Falkland Island Wolf—it had no fear of humans, because it had never had to fear anything before. Although it’s widely held that sailors arriving on the island of Mauritius, near Madagascar, hunted them and ate their eggs, another theory suggests that it was the cats, rats, pigs and other animals the sailors brought with them went feral. Read more in a Forbes Magazine Quora reprint, “What Happened to the Last Dodo Bird?” here. https://www.forbes.com/sites/quora/2016/09/20/what-happened-to-the-last-dodo-bird/#2eb2d48e9c2b

The Pig-footed Bandicoot, an adorable little Australian marsupial, is believed to have not survived the introduction of European cattle, as that would’ve cause a major change to the environment and the availability of food. Although the last verified individual was seen in the early 1900s, there’s photographic, video and audio evidence to suggest the creature may still be alive and well…sounds a little far-fetched to me, but judge for yourself: http://www.sciencemag.org/news/2007/04/pig-footed-bandicoot-rises-dead 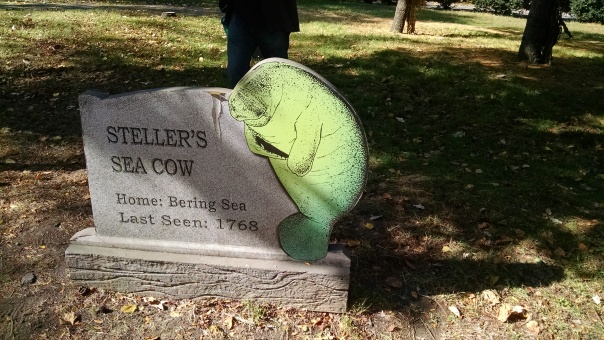 Related to today’s manatees and dugongs, Steller’s Sea Cow, indigenous to the northern Pacific, were hunted to extinction in the 1700s by Russian and European fur traders. Another theory floating around out there attributes the final blow for this species to the stress on the sea otter population which caused a rise in sea urchins which caused a depletion of kelp—the Steller’s main foodstuff. More information here: https://www.theatlantic.com/science/archive/2017/04/pleistoseacow/522831/ 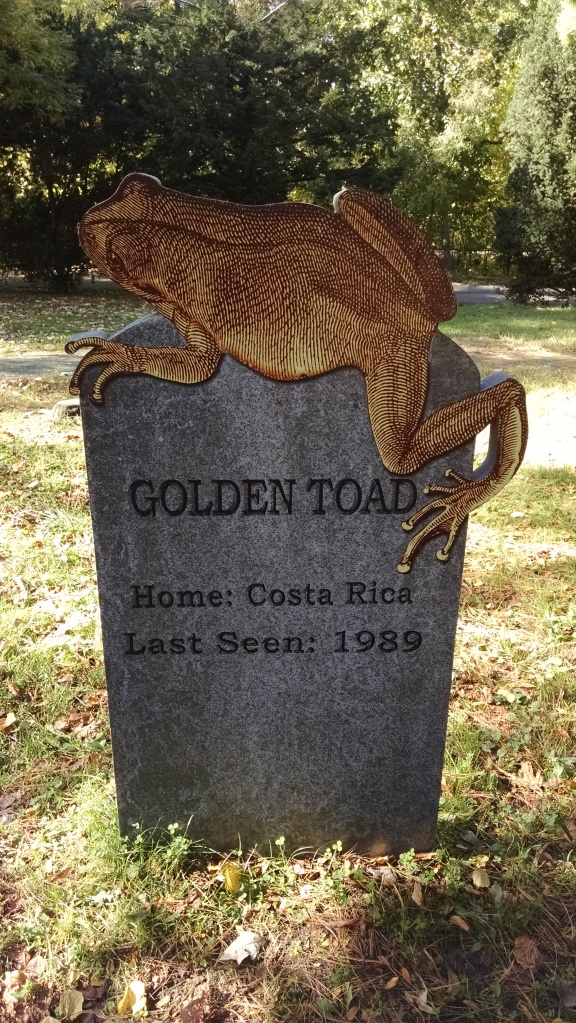 The Golden Toad lived in Costa Rica’s Monteverde Cloud Forest and was declared officially extinct in 2004. This animal was unique in that males were a dazzling orange, but the females came in many different colors, among them yellow and green. For a long time it was thought that global warming killed these stunning animals, but now they think it might’ve been a fungus: http://www.sciencemag.org/news/2010/03/global-warming-didnt-kill-golden-toad

In another case of “we didn’t realize what we were doing,” the Quagga, which was indigenous to South Africa, died out in the late 1800s. Like many other animals of the plains, they were ruthlessly hunted—they were regarded as competitors for the same food as sheep and goats. What’s come to light is that they were not a separate species of zebra, but a subspecies of the zebra we all know and love. There is a revival project going on in South Africa, which you can read more about here: https://quaggaproject.org/ 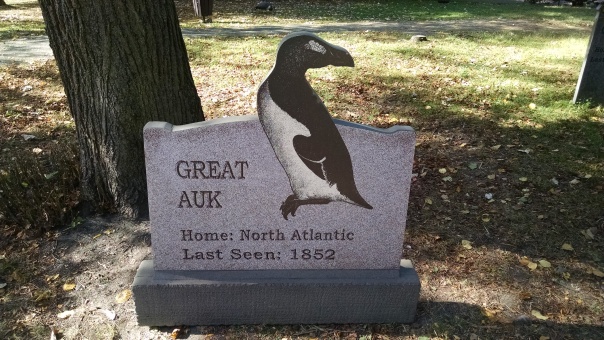 The Greak Auk—which I’ve seen referred to as “the original penguin”—was scattered all over the northern Atlantic, and was exploited for its eggs, feathers, oil, and fat. Archeological finds also suggest that it was important to ancient maritime peoples. The saddest story, though, is the one of the crew of a ship which tied the bird’s feet together and attempted to take it home. When a violent storm hit, the sailors were certain it was the work of the “devil bird” they’d brought on board, so they stoned it to death. An extensive history in Smithsonian Magazine’s “When the Last of the Great Auks Died, It Was by the Crush of a Fisherman’s Boot,” here: https://www.smithsonianmag.com/smithsonian-institution/with-crush-fisherman-boot-the-last-great-auks-died-180951982/

The Carolina Parakeet’s story is especially tragic, because it was the only species of parrot native to the United States. The last known wild specimen was killed in 1904, and the last captive one died in a zoo in 1918. This bird had a few causes of death: habitat loss, the pet and fashion trades, and farming. There’s a pretty extensive discussion in Audubon’s “The Last Carolina Parakeet” here: http://johnjames.audubon.org/last-carolina-parakeet 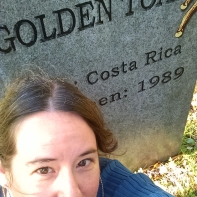 I’ve always had an affinity for toads, so here I played around with getting a selfie. Not great. 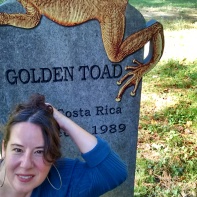 Me and the toad’s ass. Nathan took this one.

Nathan loves the Tasmanian Tiger. So this is the one he chose to pose with.