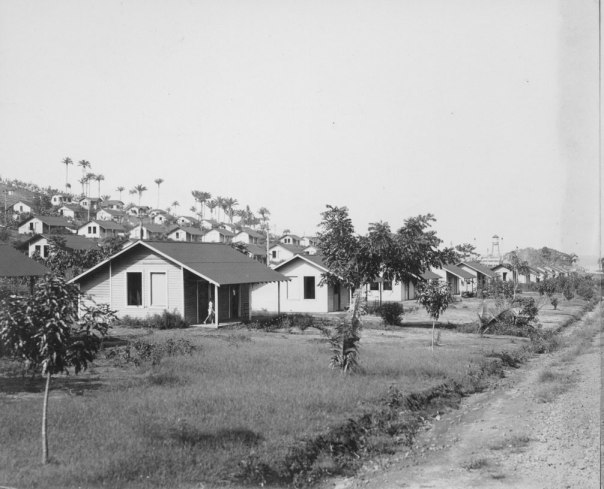 Riverside Avenue in Fordlandia, which was near the Tapajos River. This image was printed in Grandin’s 2010 book, FORDLANDIA.

If you’ve read my work, you know that settings are something about which I’m passionate. A unique, vibrant setting always makes for a more interesting piece.

I’d always wanted to write a story involving a place called Fordlandia—a city Henry Ford built in Brazil in the late 1920s so he could have his own supply of rubber for his manufacturing; a place that is now abandoned and overgrown. I finally got the chance when I wrote “Attempted Delivery,” which appears in my forthcoming collection, The Shadows Behind.

Never heard of Fordlandia? Lots of people haven’t (when I mention it I usually get “what the hell is that?”) There’s a reason for that. The experiment in a utopia, meant to mirror a factory town in the Midwest—complete with a school, movie theatre, dance hall, church, modern hospital and paved roads (but no alcohol or tobacco)—was an unmitigated disaster.

“The houses sucked for the environment, the food made people sick, the rubber trees wouldn’t grow or just plain died of a strange blight,” notes the marine biologist, Juliane, in my short story “Attempted Delivery.”

That’s the short version. The land was infertile, cargo had trouble reaching the city unless it was the rainy season, and Amazon wood—which Ford had hoped to sell in order to cover costs until rubber trees took hold—had no value. At one point the workers rioted. By 1945, Fordlandia was abandoned, nothing more than a broken dream.

One of the houses that remains in Fordlandia today. This is a screenshot from a 2008 Spanish documentary on the subject.

Today, there are people living in Fordlandia, but it’s still in the shadow of the rotting, overgrown buildings of its past. There is, however, a small museum housed in one of the former manager’s homes.

Certainly, Fordlandia hasn’t been completely ignored. Filmmaker Werner Herzog credits Fordlandia with inspiring 1982’s Fitzcarraldo (Herzog is also directing a forthcoming Fordlandia television series, according to several sources). In 2015, Washington, D.C.’s Art Museum of the Americas featured the exhibit Fordlandia: The Lost City of Henry Ford, which featured photographs of what was left of the city in 2012. A 2017 feature-length documentary, “Beyond Fordlandia,” chronicles the environmental status of the place. A stunning, Heart-of-Darkness-esque novel using Fordlandia as the backdrop for a dark drama was published in 2000, and more recently, the place has gotten a little more attention, thanks to a book by Greg Grandin, which was a finalist for 2010’s Pulitzer Prize.

Interested in knowing more about Fordlandia? Here are a few great references–many with stunning photos of the abandoned structures–and I didn’t list them here, but if you search YouTube there are some video features which come up. Enjoy…and don’t forget to pick up The Shadows Behind at http://bit.ly/shadowsbehind to find out what role this mysterious lost city plays in my brand new short story, “Attempted Delivery.”

Fordlandia: A Novel, by Eduardo Sguiglia (translated from the Spanish by Patricia J. Duncan)