For Mother’s Day, a ticket to the beyond 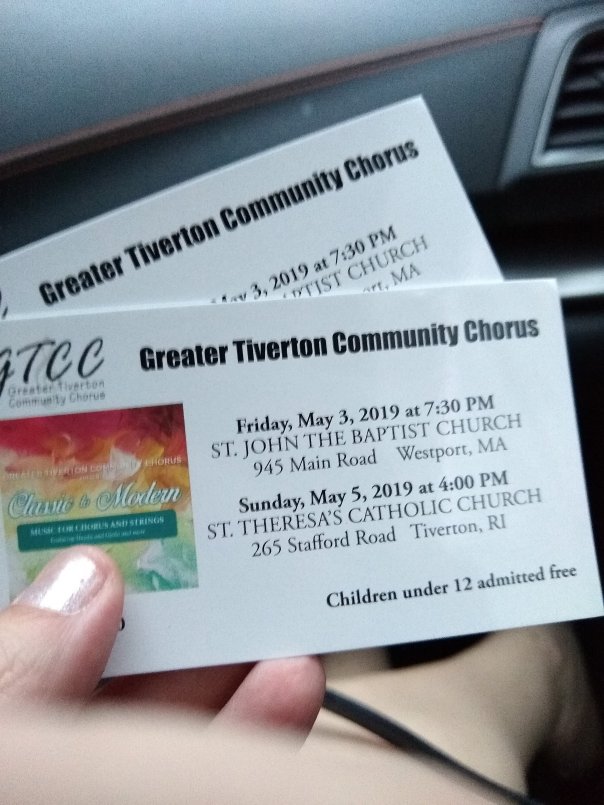 Tickets to the concert I attended the weekend before Mother’s Day.

We hear and see these stories all the time, especially now in social media: our loved ones who have passed on make their presences known. Admittedly, some of these tales may seem more like urban legends or click bait—there are, for example, three or four different versions of the ‘cardinal visits mom/sister/grandchild after daughter/sister/grandmother’s death’ and several articles across the web entitled ‘XX signs your deceased loved one is with you.’

But there are just as many things that happen to people, every day, that seem less like coincidence. Things that have no rational scientific explanation. Like my cat knocking over a piece of artwork a friend made within minutes of that friend’s passing, something my cat had never gone near or even noticed before. Or my friend seeing her deceased brother’s initials and birth date (including year) on the license plate of a car that pulled in front of her. Or another friend, calling out to her late husband to help her find the insurance papers; when she came downstairs the next morning, they were literally next to her coffee maker—but no one else had been in the house (shivers, right? Me too).

Sometimes these things are coincidences, and I won’t deny that. I have always prided myself on knowing the difference between a sign and a coincidence; sometimes, it’s tough to tell, and you really have to make the call. Others? Not so much.

I had one of these happen to me recently. 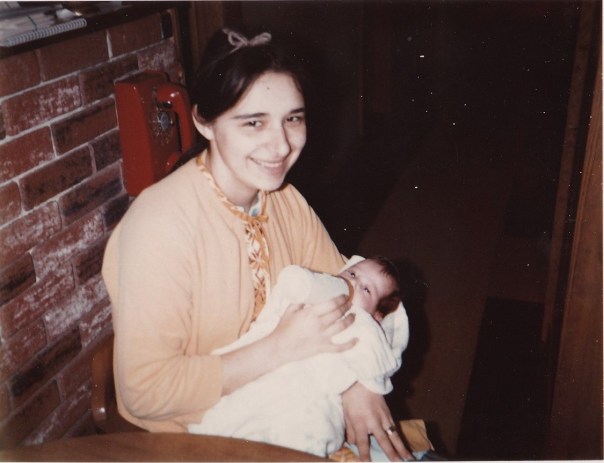 My mother passed away in 1986, when I was fifteen (post-Challenger, pre-Chernobyl; that was certainly one hell of a year). Recently, I realized I’ve been without her for 33 years. She missed a lot of things in my life, but I always believed that she was still around, even if, most of the time, I saw little evidence of that. 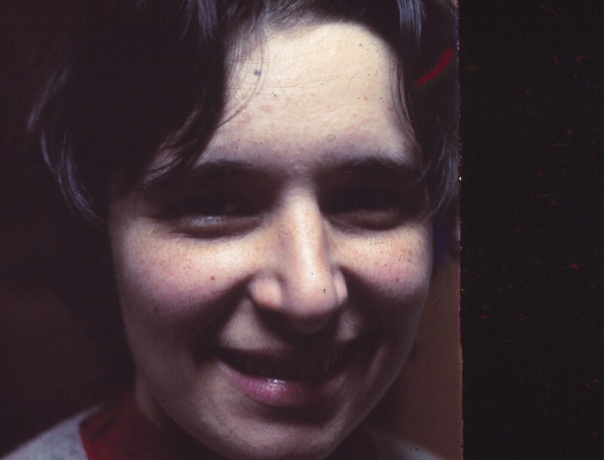 Sometimes I talk to her, out loud. I never really know if she can hear me or not. It’s just something I’ve done for three decades—when I’m having a bad day, or I’m confused, or I want to tell her she would have enjoyed whatever movie I just saw or that new Bath and Body Works scent I just bought. Sometimes, I tell her I’m glad she’s not here, because she was incredibly social. Every embarrassing thing I ever did from the time I was born would have been all over Facebook, and forget about privacy, because I wouldn’t have any. So, sometimes, I think, there is an upside. 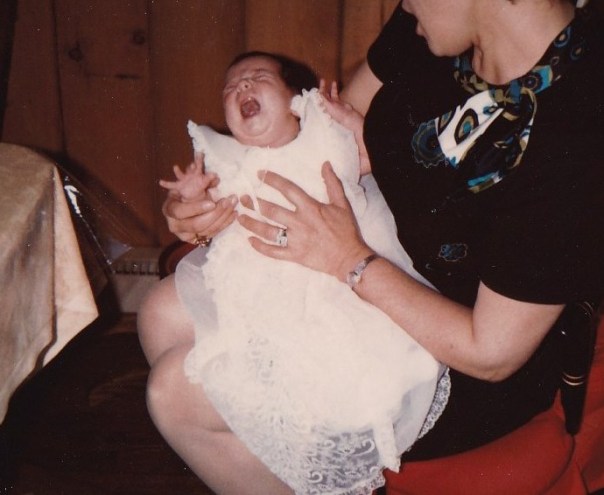 THIS is the typical embarrassing stuff my mother would put on Facebook if she were alive today. Apparently, I was not pleased about my christening. I have plenty more of me naked in bathtubs and getting my diaper changed, but no one wants to see that, so this is as good as it gets, Mom.

Most of the time, though, there isn’t.

I had been invited to a spring choral concert, and the plans had been on the books for a few weeks.  I will preface this by saying that my parents were musical people. My mother directed our church choir for many years; she was a music teacher, and she and my dad directed musicals at area churches and high schools. My mother was also an organist and played several instruments. She had a strong connection, as did I at one time, to this type of performance art. 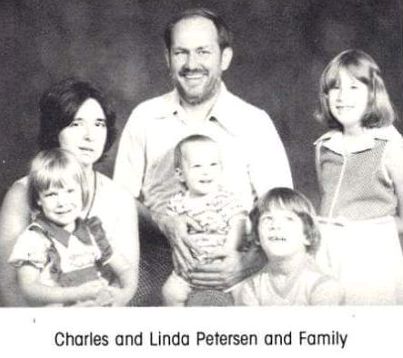 We were members of the United Methodist Church in New Milford, Connecticut, up until 1982 (the trauma of leaving that church to go on a rollercoaster ride of crazy places that met in storefronts–the thing that really disconnected me from church in general–will someday be told in another post). From left, my sister Missie, Mom, Dad, my brothers Chip and Chuck, and me. This was taken in 1980.

Since I have been disconnected from these roots for years, and I was having a rough tangle with an encroaching decision, I thought this would be the perfect time to ask for help and guidance. “You know? I know this is impossible, but if you’re out there, and if you can hear me, send me a sign. What I’d really like to hear is ‘How Lovely is Thy Dwelling Place.’” And then I stubbed out my cigarette and laughed. Because the chances of actually hearing that piece as opposed to anything else available were actually pretty slim.

Johannes Brahms’ “How Lovely is Thy Dwelling Place” holds a special place in my heart. In 1987, I was chosen to participate as an alto in Connecticut’s All State Chorus. We sang this piece. I couldn’t tell you to this day what was on the rest of that program, nor could I even attempt to sing my old parts from anything else we performed. But this? I remembered every lyric, every note. This piece has haunted me for 32 years. I consider it my favorite piece of choral music of all time. Curious? You can listen to it here: https://www.youtube.com/watch?v=XwnZ748e3CA

We went to the concert, and my friend handed me the program. They were in the middle of singing something by Hayden, a composer that has never really grabbed me, although it was beautifully executed. I took this opportunity to read my program and see what was on the slate for the evening. The choir director’s notes were extensive, and discussed why she had chosen this piece or that piece.

Imagine my shock when I got to the last paragraph and she mentioned why she’d chosen “How Lovely is Thy Dwelling Place.”

I felt like someone had snatched the breath from my lungs. What I thought was are you fucking kidding me? And then hated myself for thinking a curse … I was, after all, in a church.

That isn’t right. That can’t be right; you’re reading things. That’s all. Your brain is making it up.

I went back and read the sentence again.

Nope. I had definitely read it right.

I checked the song listing, which appeared in the program a few pages later. Yes. It was there. After intermission.

Intermission came and we went outside to smoke a cigarette.

“I have something to tell you, but I don’t know if I can without crying.”

But I did manage to tell the tale, and I got the reaction I expected, of course. My ever-pragmatic friend just mumbled, “well, coincidence. It is the spring concert.” (This particular piece in A German Requiem is popular with choirs around Easter-time).

I pointed out that there were hundreds, perhaps thousands, of pieces of music. “And they had to start rehearsing this in January. This wasn’t just ‘I want to see a bird fly across my path’ or ‘I hope you can show me your favorite flower.’ This was really, really, specific.” In other words: massive odds. The fact that the choral director plucked this piece, to play at this concert, from the bottomless sea of eligible work was honestly just – well, damn near impossible.

We went back in after the intermission, and the performance was so beautiful it made me cry. Or perhaps it made me cry for more reasons than just that: she was there! She was out there, and she heard me, and she went out of her way to make sure I knew it. In a sense, the nature of the lyrics of this particular piece of music also told me that she was in a beautiful place. That everything I had grown up believing about the great beyond—at least in my family—was true.

Maybe you believe in this stuff, too, or maybe you just think I’m a raving crackpot. Either reaction is okay. My point is this: sometimes, we feel like those we love are lost to us forever, but they aren’t; not really. They are always with us in one capacity or another, whether we notice or not.

But the next time you ask a random question of those beyond? Don’t be surprised if you actually get an answer.

I did, and despite how emotional it all was? I’m glad I asked.

Posted on May 12, 2019, in Deep Thoughts & Fun Stuff and tagged Brahms’ German Requiem, how do you know if there is an afterlife, How Lovely is Thy Dwelling Place, Mother's Day, signs from deceased loved ones, urban legends regarding dead loved ones. Bookmark the permalink. 6 Comments.