A lantern below decks on the Charles W. Morgan, a whaling ship at Mystic Seaport in Mystic, CT.

“Carving Grace” isn’t my first story about terror by the sea. Although I didn’t grow up near the ocean—I grew up in the middle of the woods by a lake instead—I have always been fascinated by all things salty. While it probably had something to do with the fact that, because of my dad the English teacher, I read both The Old Man in the Sea and Moby Dick before the age of ten, I truly fell in love with the sea’s raw atmospheric power when I read The Rime of the Ancient Mariner in high school.

2020 was my best writing summer ever—I had every evening after work and weekends to do nothing but write. One story I’d always wanted to pen was a tribute Rime, but I’d never quite nailed down the story, the characters, the—well, the everything. Nothing ever came to me. 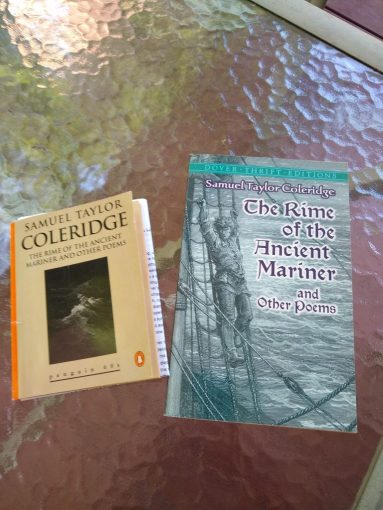 A couple of many copies of Rime of the Ancient Mariner that I own. These two are pretty well abused. I’ll have to talk about all of that in another post sometime, but if you were to open these, you’d see a lot of scribbling, highlighting, and notes. Some of the passages connect this poem with some artwork in Disney’s Haunted Mansion.

Until last June. I wrote “No Sweet Bird”—a modern day ghost story crammed with allusions to Rime—last summer. It was inspired by the poem’s inciting incident—killing an albatross—and the lost Franklin Expedition, which I was privileged to see an exhibit about in 2019 at Mystic Seaport. 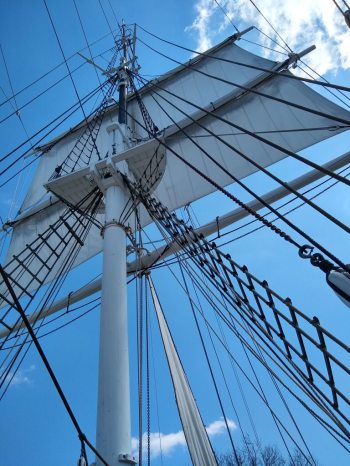 The main mast of the Charles W. Morgan, a whaling ship at Mystic Seaport in Mystic, CT.

But the main announcement here is that “No Sweet Bird” will be published in Crow & Cross Keys sometime in 2022! They publish some really interesting stories, so I encourage you to head on over there and check it out at https://crowcrosskeys.com/ and I’ll let you know when you can read “No Sweet Bird”!