It hasn’t snowed much at all since I’ve been here; there has been only occasional “glitter snow”–a barely-noticeable afternoon squall that glints in the sunlight as it drifts to the ground. Here in P-Town’s East End, my daily experience has been that the sun shines and the temperature is crisp, but not unpleasant.

Back home, this would translate into people out and about and cars on the go. But that’s not the case. Perhaps it’s because it’s winter and the town has pretty much emptied—many businesses close and the homes around me are stalwart and silent. There is an eerie stillness in all this sunshine.

Yesterday, though, I got up, and could see out my bedroom window that the character of the morning light was different: it was dark and close. I pulled back the drapes and was startled to see the dormant rose bushes dusted with white and my tiny yard and picnic table frosted with a quarter-inch or so of the stuff.

I went outside, expecting it to be cold and more silent than usual; expecting what we get at home: the wind cuts through me, and it’s so quiet I can hear the flakes landing on those that had fallen before them.

But it was quite the opposite. It was so warm I only needed a sweater. The birds were singing. A couple of guys were chatting in front of a fence across the street (and one of them waved to me). And in the span of five minutes, a cable van, a heating truck, three passenger cars, two people riding bicycles, and someone jogging all sped past me. At the house across the street, two or three construction workers were banging boards around.

Apparently, there is a paint color called “Cape Cod Gray”—and it’s relatively standard. Behr, Olympic, Cabot Stain, Pittsburgh Paints, and several others (or maybe even all of them) have this color in their palettes. What’s odd is that when this place is the grayest, that is when it seems to come to life. 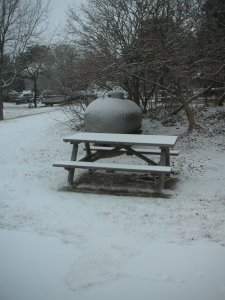 My yard and picnic table. 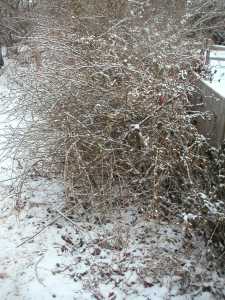 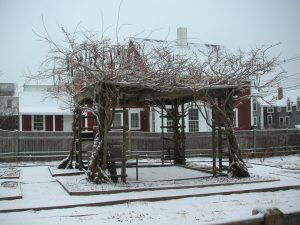 I like to call this the Lord of the Rings canopy. It’s in the garden adjacent to my house. 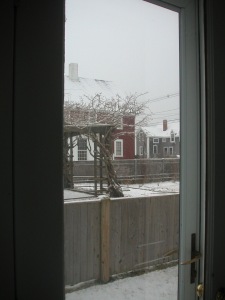 The view out my front door. 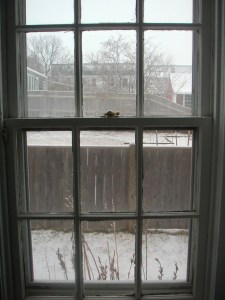 The view out my living room window. 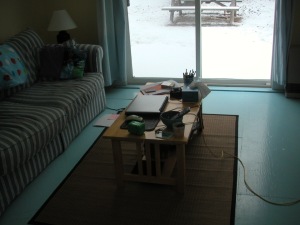 My writing space — much darker than usual. I had to turn the interior lights on to work. 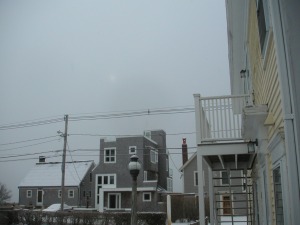 This is the house across the street. I love its monolithic quality in this light.

A similar shot, but I included it because, if you look closely, you can see a spot of the sun high above the house. 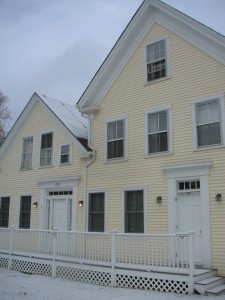 This is actually the front of my house. My condo is in the back.

Commercial Street, looking toward the Mailer house. Notice how well-traveled the street looks, and that it’s clear even though, at this point, the snow was still falling. 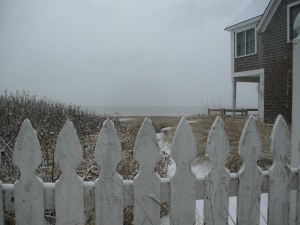 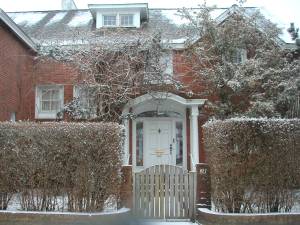 The Norman Mailer Writer’s Colony in the snow. It hasn’t looked like this since I arrived. 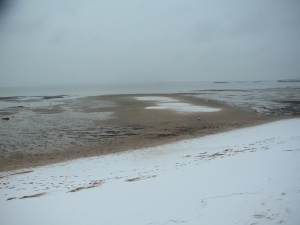 The beach at low tide in the snow. 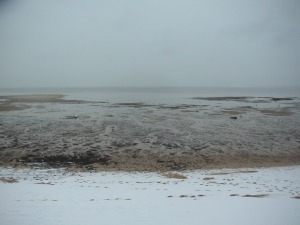 Another shot of the beach. I love the wasteland look of it. 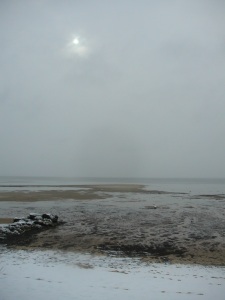 This view, especially with the spot of sun above, reminded me of the ice planet of Hoth in The Empire Strikes Back.