A dear friend and excellent poet, Chris Emmerson-Pace, pointed out that fire is a recurring element in much of my fiction. I hadn’t recognized that until he said it—it was 2004, and at the time, I’d written several stories that utilized fire: “Burning Origami,” “The Bitching Bench,” and an unpublished novella, Bad Apple, among them. He noted that my subconscious obsession with fire was probably symbolic of something I was trying to work out in my head; that, more than likely, whenever I had resolved whatever it was, fire would take a back seat.

Fast forward to 2010, and this hasn’t happened. In fact, fire has shown up in several more stories over the years: “Candle Garden,” “Matchbox,” “Confetti,” “Synecdoche,” “Jingle Shells,” and “Screams of Autumn.” While, yes, I’ve explored other motifs and featured other things (ants comes to mind), I still consider this significant. So what is it about fire that’s so damn compelling?

The answer would come on Halloween in 2009, but I didn’t figure it out until recently.

I’d gone to Newport, Rhode Island, for a signing of The Everything Ghost Hunting Book, and to hang out with some friends from college, which is a once-a-month thing. They lit the usual bonfire in the back yard and we settled in for the stimulating hours of conversation about all things interesting.

Heather and John had just finished divesting themselves of junk: at least a dumpster’s worth, as I recall. Somewhere between the second and third bottle of red wine, John brought out a wrinkled garbage bag. He opened it up and took out a wooden horse and a wooden unicorn, both on wheels. They had belonged to their daughter (who was in bed), and their fates had been sealed.

“I’m sick of those friggin’ things being around,” Heather said.

“Why didn’t you just chuck ’em?” I asked, which was a stupid question, considering I know John never throws away anything that he can burn.

John lit up a cigarette. “I know you like to burn shit, so I saved ’em ’til you got here. I figured this’d be a cool activity on a Friday night.”

I didn’t take offense to him commenting on my own pyromaniacal tendencies (I have a party every winter at which my friends and I burn our rejection slips). And I wasn’t shocked we were going to burn children’s toys. In fact, it was going to be a thrill to burn something other than empty pizza boxes and beer pods. We actually did a small ritual, took some photos, and torched the things.

But they took a long time to burn.

“They’re like symbols. It’s kinda freaky, because they represent the past,” John said, watching as the horse’s yarn mane burst into flame. 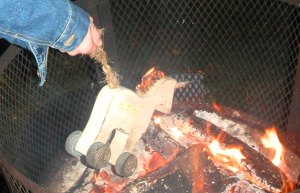 If you look closely, you can see the horse's mane burning.

I’ve heard that “the definition of insanity is repeating the same negative behavior or pattern of the past, expecting better results each time it’s tried.” With that in mind, I’ve spent my life identifying patterns and behaviors that lead to disastrous situations and making sure I never repeated them—I’m hyper-aware of my past. But what happens when something feels like it’s the start of the same old pattern, but it takes an unexpected shift? Or we want to once again attempt something we previously failed, but we’ve certainly got more resources now than we did then—we’re older and wiser, so to speak? Conversely, what happens when every nerve in our bodies screams for something and it’s the right time to do it, but because it looks suspiciously similar to something that singed us in the past, we don’t? What opportunities might we miss?

As we watched the horse, and then the unicorn, ignite and send a hail of sparks into the night sky, it occurred to me that sometimes, the danger is in not taking the plunge out of fear the past will repeat itself. That sometimes we have to trust our instincts and let it go.

It’s also interesting to note that my latest story doesn’t have any fire in it at all.

It features water instead.