← I’LL BE AT THE OPEN AIR MARKET & FESTIVAL IN MIDDLETOWN WITH NEHW ASSOCIATION SUNDAY, OCT. 23
MISS ‘WHY GHOSTS LOVE ME?’ FUNDRAISER? PIX AND VIDS HERE! →

A “LIT” LOOK AT DISNEY’S HAUNTED MANSION: THE ATTIC’S PORTRAIT

A shot of the Bride’s portrait in the attic scene in Disneyland’s Haunted Mansion, taken in May, 2008. Photo by Dave DeCaro and used with permission; if you’re a Disney Park fan, you won’t want to miss his site! http://www.davelandweb.com/

Your Doombuggy rounds the corner and enters the Mansion’s attic, a creepy menagerie of web-shrouded trunks, lamps, furniture and dishes. The deeper you go, the more dense and specific the items become—you see fine china, a rotting wedding cake, an embroidered wedding announcement…and then a ghostly bride.

There have been so many changes in that scene in the last few years, and not just to the bride herself. The last time I traversed the forbidden attic was in 2008, and I noticed for the first time that at least one portrait—that of the bride with one of her husbands—is in an oval frame.

One of the Edgar Allan Poe’s freakiest little pieces isn’t the one that’s read as part of school curriculums or even the most talked about. If you’ve been reading my blog for awhile, then you know what that piece is, because I’ve referenced it several times: “The Oval Portrait.”

While it’s true that oval frames for portraits were quite common during the Victorian age, the bride’s portrait at its very core seems to have been inspired by Poe’s short piece.

٭ Poe’s “Oval Portrait” is a story within a story: it opens with the narrator and his valet stumbling into an abandoned mansion for shelter. In theHauntedMansionattraction, we play the role of the narrator: we have “stumbled” into a decrepit, abandoned (well, by LIVE people, anyway) mansion.

٭ The narrator and his valet choose to settle

“in one of the smallest and least-sumptuously furnished apartments. It lay in a remote turret of the building. Its decorations were rich, yet tattered and antique…”[1]

A turret could certainly be comparable to an attic—high and tucked away—and notice that the turret’s furnishings could easily describe what’s in theHauntedMansion’s attic. 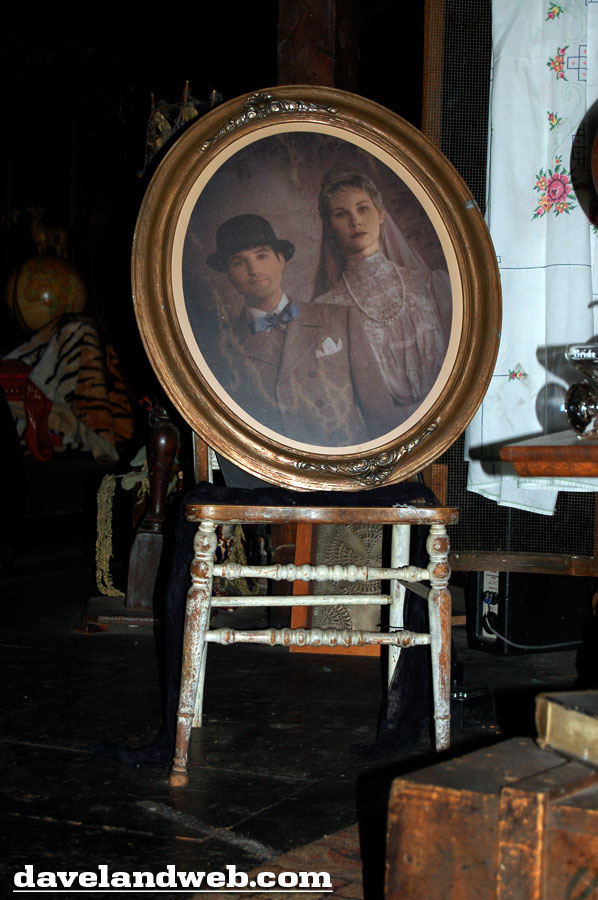 ٭ The comparison between the frames in “The Oval Portrait” and the Haunted Mansion is also worthy of note. “The Oval Portrait”’s frame is described as “richly gilded and filigreed in Moresque.”[2] Another term for Moresque is Arabesque, which is a type of symmetrical scrolling (usually consisting of some kind of foliage). Take a closer look at the photo above. Note that the Haunted Mansion’s frame appears, although worn a bit, gilded—and that the silver scrolling on the top and bottom appears to be symmetrical: Arabesque (Moresque). The word “arabesque,” in addition, is used higher up in “The Oval Portrait”: “frames of rich golden arabesque.”[3] So there may have been some consideration of this story here when the Imagineers were choosing the frame.

٭ Both portraits are stunningly life-like. While we Disney fans would normally attribute that to the Imagineers’ insistence on quality, this fact is a key plot point in Poe’s piece (which was originally titled “Life in Death,” by the way): The narrator is so captivated by it he is drawn to learn more about the work:

“Least of all, could it have been that my fancy, shaken from its half slumber, had mistaken the head for that of a living person…I had found the spell of the picture in an absolute life-likeliness of expression, which, at first startling, finally confounded, subdued and appalled me. With deep and reverent awe I replaced the candelabrum in its former position…I sought eagerly the volume which discussed the paintings and their histories. Turning to the number which designated the oval portrait, I there read the vague and quaint words which follow…”[4]

٭ Lastly, the tragic tale “The Oval Portrait”’s narrator reads in the volume is that of a young bride—and it ends in death.

If you’d like to read Poe’s “The Oval Portrait”—a later version in which he removed some extraneous details about opium use—you can read it for free here: http://www.eapoe.org/works/tales/ovlprtb.htm (if you want to read the original 1842 version which includes the whole introductory paragraph at the beginning, you can do that here, although most published versions of this story never include it: http://www.eapoe.org/works/tales/ovlprta.htm). If you’d prefer to own it for your library, you can find it in The Complete Stories and Poems of Edgar Allan Poe here: http://amzn.com/0385074077. You can also get just the story “The Oval Portrait” for your Kindle here: http://amzn.com/B005EC3KI8; or, if you prefer to own his complete works for your Kindle, you can buy that here: http://amzn.com/B0038M2IMK.

← I’LL BE AT THE OPEN AIR MARKET & FESTIVAL IN MIDDLETOWN WITH NEHW ASSOCIATION SUNDAY, OCT. 23
MISS ‘WHY GHOSTS LOVE ME?’ FUNDRAISER? PIX AND VIDS HERE! →