The Writing Life: The Balance of Work and Play

Someone had once written that being a writer was like having homework for the rest of your life; someone else had once written if you do what you love you’ll never work a day in your life. Both are true, at least for me, when it comes to writing. But that still doesn’t mean that just because I love the work I don’t like to kick back—in fact, knowing when to stop and cut loose, especially if you’re an intense writer, is one of the key factors in creating a balanced life (if you think it sounds like an excuse to party, you’re probably right, but you know how the cliché goes—all work and no play makes Jack a dull boy). Taking a break, no matter how much work you have on your plate, can often refresh you can get you going again—and in some cases, back on track if you’ve been derailed.

The New England Horror Writers sponsored a workshop on Feb. 4 at Annie’s Book Stop inWorcester,MA, and I was a presenter. I spent the weekend with fellow presenter Trisha Wooldridge and participant L’Aura Hladik, and even though I was buried under much more work than I thought I was going to get done in the two weeks ahead of me up at the Norman Mailer Writer’s Colony, I found it actually paid off—when I got to the Colony I was rested and ready to work, and in the end, got twice the work done I would have if I hadn’t cut myself a little bit of a break.

In addition, Trisha needed to check out a local eatery which she was going to review, so we got to sample some great dishes—more than she would have had she been on her own (who orders three meals for one person)? Talk about balance!

Here’s pix from that weekend (and some video of us making absinthe). It was also my birthday). Enjoy! 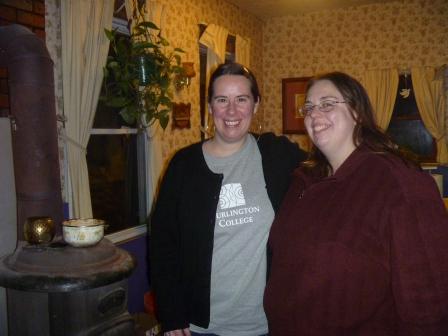 Me and Trisha at her house on Friday night.

L’Aura Hladik, left, author of Ghosthunting New York and Ghosthunting New Jersey, enrolled as a participant. L’Aura makes fantastic cupcakes in a variety of flavors which are available for purchase here: http://www.njghs.net/exoticakes.html. She brought me something new for my birthday!

Trisha prepares absinthe—it’d be L’Aura’s first time trying it out. 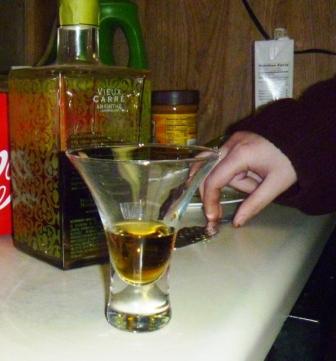 Not sure L’Aura liked this too much!

L’Aura gets out the rum and Coke.

I had to take a photo of this goblet! It’s way cool!

We ordered in pizza!

Saturday, after the workshop, we visited Loft 266 Restaurant and Bar at 266 Park Ave., Worcester, MA. Trisha was going to write a review on the establishment; I’ll say the service was terrific.

Trisha, L’Aura, and me at the bar.

We ordered three things to try:

I eat a lot of spinach and artichoke dip—it’s a favorite when I go out—and I was impressed with this one. Many spinach/artichoke dips are just bathing in oil, and this one wasn’t—not at all. It was moist, but not oily. I’d highly recommend it.

L’Aura ordered the nachos, and the dish was just about as good as I’ve found at other places. However, we both came to the same conclusion: there just wasn’t enough cheddar cheese, and what little was there was crisped to chip form. That was our only criticism; otherwise, the salsa, guac, vegetables and everything else were fresh and delicious.

This was the most interesting on the menu, so Trisha ordered it just because it sounded so unique: Reuben Egg Rolls. Wow, just wow! They were awesome! Definitely unique. I would drive to this restaurant in Worcester just to get these. In fact, when I’m back up in the area for Rock and Shock in October, I’ll make sure to come over here and get these. 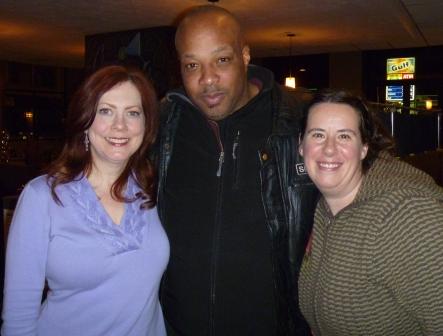 We had a nice time talking with this gentleman.

Trisha ordered Mango Cheesecake for dessert, which L’Aura and I—having grown up around New York City—were disappointed in. It wasn’t real cheesecake; it was like ricotta or something. It tasted nothing like cheesecake as you’d know it but a big slice of flavored ricotta cheese. Not recommended.

This Key Lime pie, however, was pretty good; the restaurant probably gets a brand called Mike’s, which is what we buy around here in Connecticut. It’s the best Key Lime you’re going to get in this area. I think you can find it at Trader Joe’s and Stew Leonard’s.