← THE NASTY NINE: Do you have a narc in your life?
DARK DISCUSSIONS gets in touch with PYEWACKET →

THE TERROR PROJECT: SALE and a RELEASE PARTY VIDEO TREAT! 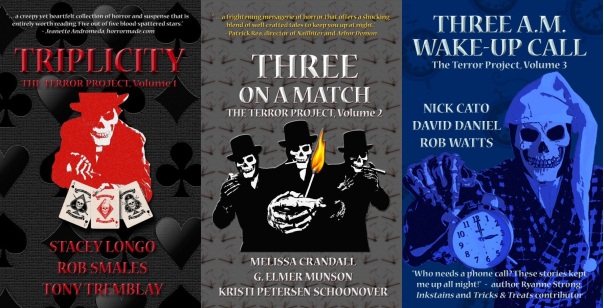 Want some great summer chillers to enjoy at the beach? Now’s your chance to get nine great novellas and pay less…and scroll down to get a peek at the private Three on a Match Release Party!

Books & Boos Press is offering the first two books in The Terror Project series—Triplicity, which contains stories by Stacey Longo, Rob Smales and Tony Tremblay—and Three on a Match, which contains my J-horror inspired piece “Splendid Chyna” and tales by G. Elmer Munson and Melissa Crandall—for a special sale price TODAY (June 4) through June 10 (next Sunday).

Here’s where you can get your copies (click on the titles):

“The Christmas Spirit” by Rob Smales

Three on a Match

“Thicker Than Water” by Melissa Crandall

Want them on audio? Guess what? Audio books are on their way! I’ll post on this blog when those are available.

Below, get a peek at the private Three on a Match Release Party, which was held at my house in September. Don’t miss out, and happy reading!

← THE NASTY NINE: Do you have a narc in your life?
DARK DISCUSSIONS gets in touch with PYEWACKET →