What happens when someone overhears you in the grocery store … 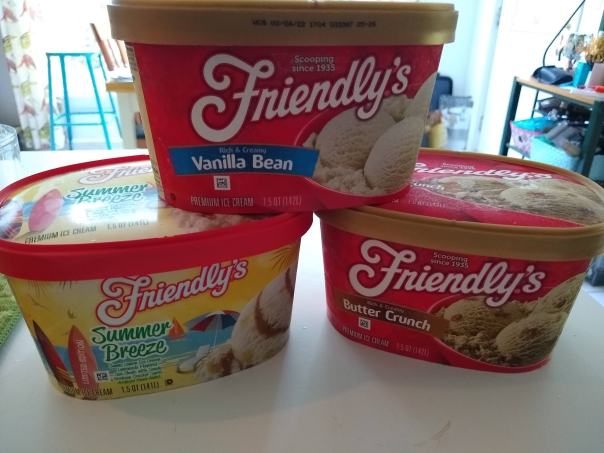 It was a beautiful day here in Connecticut—finally, hot! I’ve been eating a lot of ice cream lately. Mostly because I love it, life’s too short, and I’ve been in a very happy place for over a month.

My three favorite flavors are vanilla (because, you know, back in the 1970s, you didn’t have a whole lot of choices except for Neapolitan and coffee and I wasn’t a fan of chocolate or strawberry), Butter Crunch (because my dad always took me out to Friendly’s for that) and Summer Breeze, a pleasing, summer-only edition blend of vanilla, lemon candies, and graham cracker. This last one I discovered in 2019 when it was on sale in a grocery store near East Providence and I wanted to try something new.

I put the Summer Breeze in my cart. I’d only planned on getting two cartons, so I tried to make a choice between the Butter Crunch and the vanilla.

Suddenly, I said—louder than I’d intended—“F— it.” I grabbed them both.

I heard a woman’s laugh from down the aisle. She was standing in front of the cases where they keep all the frozen treats.

We wished each other happy eating, and I headed to the check-out.

You’re probably wondering why I’d put this on my blog, but it was just one of those perfect moments in life in which you just bond for a second with a complete stranger. And after the rough year or so we’ve survived, it was comforting. It was a reminder that yes, eventually, we’re going to be okay.

And now … which carton should I mine first?