I’ve always loved a corn maze, though I must admit I’d never heard of them until the early 2000’s—it seemed like that was a “new” thing back then. Every farm around here was doing them, and there were plenty to choose from.

We always pick some kind of Halloween adventure every year for the two of us to do. We’ve done Pumpkin Blaze, Forest of Fear, and the Bronx Zoo’s Boo at the Zoo a few times. Before that, I did things down in Sleepy Hollow. I’ll tell you out of the gate, too, that although I am a horror writer, I’m seriously not a fan of being abjectly terrified. I like things more on the creepy, atmospheric side than the thrill and scream side.

The other issue is that a tradition is a lot of fun, but doing the same thing a couple of years in a row is the max. We like to shake it up. We hadn’t done a corn maze in over a decade, so we decided this was the year to do it. Also, we wouldn’t have to drive too far, and the price point was good (many corn mazes are only anywhere from $5 – $15 per ticket).

We went to Castle Hill Farm in Newtown and had a blast! It was actually quite the work out, and it was probably the last of our unusually warm days. If you live in the area and are interested, Castle Hill Farm’s website is here: https://www.castlehillfarm.net/

Here’s some pix, and Happy Halloween!

Nathan and I climbed out of the car and grabbed this first selfie.

After parking, we walked a long a dirt road to a field to buy our tickets. Admissions was $12. 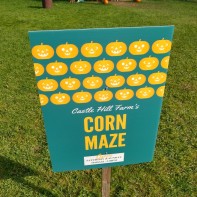 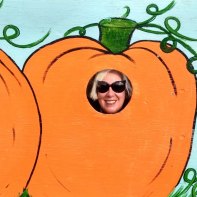 Ha! Small town fun — I ran into my friend and co-worker Stella at the maze! She was there with her kids.

The theme for this year’s corn maze is a Castle (get it? CASTLE Hill?) I thought this creepy knight was kinda cool! 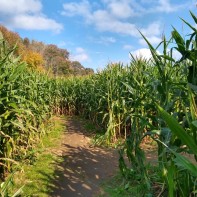 The observation deck is at the center of the corn maze. It’s funny how life reminds you about things–this deck totally reminded me of one on Tom Sawyer Island in Walt Disney World. I have a picture of my dad doing something similar from a similar deck back in 1974. I’ll have to find that photo and compare them. I know I have it someplace.

lt was an unusually warm October day–like, in the 80s–so even though it was very breezy in the corn, the breeze was very welcome. This is us on top of the observation deck.

The view from the observation deck.

I liked my shadow cast on the ground, so I took this photo to remember it.

My copy of the map. You had to go through the maze (following said map) and mark off each station in order, then at each station, there was a photo that you had to circle hidden inside a complicated drawing — kinda like a “Where’s Waldo”.

Nathan wrote “NATHAN WINS” on here to be a smart ass. Long story on that, but he navigated us through the maze pretty well (note–I did too). He’s the farm boy, though. He knows how to NOT get lost in a corn field.

My farm boy husband ALWAYS has to talk to the goats. ALWAYS. 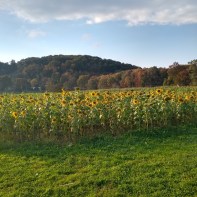 A lovely sunflower field at the farm.

We took a photo of a couple in front of this sunflower field and they returned the favor. 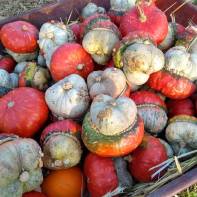 These are soooo LOVECRAFTIAN, AREN’T THEY? Story idea!!!

These were for sale in the pumpkin patch for 99 cents a pound. I HAD TO HAVE ONE because I’d never seen one before. It came to $15 but it was worth it. 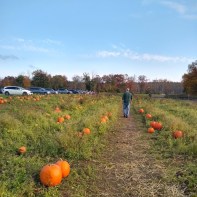 Nathan walks through the pumpkin patch.

I really wanted a picture of me with my zombie pumpkin.

Walking in the corn: all these years I’ve been writing, I was never sure what the sound of corn rustling in the breeze really sounded like so I could accurately describe it for readers (in case I ever have occasion to write something in a corn field, that is). I think I figured it out.