I live in the woods, and although I’m really close to everything—I have superstores, banks, a movie theater, and every resource just about two miles in either direction—we’re secluded here. What’s cool about this is we have so many woodland creatures that use our back yard as part of their habitat. Aside from the on-average twenty species of birds at our feeders and our resident groundhog, we have deer, raccoon, fox, possum, chipmunks, squirrels, field mice, skunk—even the occasional bobcat (which we now know are in Connecticut) and a bear, although Nathan does pretty well with keeping him scared off.

We also get bunnies! I see at least one every summer. Meet this year’s bunny! He seems much less timid than our other bunnies. I love him. He lets me get close to take photos (although these are zoomed a little bit—I don’t want to get so close he or she feels threatened). I shot some video of him—feel free to watch if you can tolerate my tiny kid voice. I don’t know why I do that when talking to cute animals.

Hope he hangs around and a predator doesn’t get him! He’s certainly eating every damn dandelion in the yard. No, he doesn’t have a name. He is just Bunny. 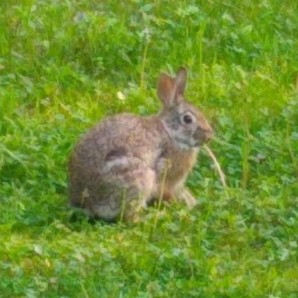