Brady Allen’s “Dog Farts and Dancer Girls” is a comment on what can break down in a romantic relationship—often, it’s what’s never said.

I love the mood in this piece; I can feel the weight of what’s unspoken in that car in the first scene—even though I’m not quite sure what it is right off the bat, I know that it’s something monumental, something that threatens to split this couple in half. If you’ve got trouble in love, this story might just give you some ideas on what you shouldn’t do.

Check it out at Read Short Fiction here: http://bit.ly/ktuDxc

HEARTBROKEN? GHOST STORY COULD BE ‘BALM IN GILEAD’ 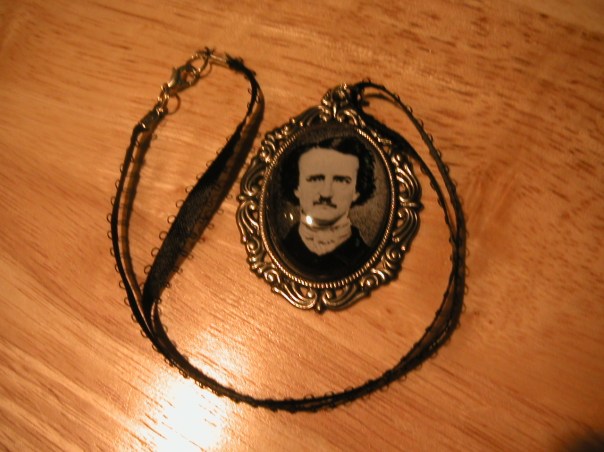 The Edgar Allan Poe pendant my friend Rachel gave me for my birthday. It features what's known as the Brady Portrait.

On Saturday I met my friend Rachel Kovaciny for our monthly writing date. When she arrived, she reached into her pocket and extracted a black silk pouch. “I saw this and I said, ‘Kristi has to have this!’”

Inside the bag was an oval pendant containing a miniature version of the Brady Portrait of Edgar Allan Poe.[1]

“For your birthday,” she said, “I’m giving you a man who won’t break your heart.”

Interesting comment. Poe certainly had his share of romantic heartbreak—his beloved, young wife Virginia died of tuberculosis (we need only to read his two-line lament “Deep in Earth”[2] to understand just how inconsolable he was). But most people forget that Poe had quite a failed love life both before and after his wife. He returned from the University of Virginia to find his childhood sweetheart engaged to someone else[3]; he shared an “intensely emotional friendship”[4] with “Fanny” Osgood, but she went off with Poe’s rival[5]; both Marie Louise and Helen Whitman, briefly Poe’s muses, turned down his marriage proposals[6]; he fell in love with Annie Richmond, who was married and unattainable[7]. And there were a few more.

I admired the pendant. No matter which way I shifted my palm, Poe was looking at me—in fact, he was never going to not be gazing at me. He couldn’t look away from me any more than he could’ve looked away from his loves long after they were gone. After all, Poe’s horror stories didn’t necessarily deal with haunted houses or objects, but with haunted people. People who couldn’t escape their pasts or their broken or unrequited loves. “Ligeia,”[8] “Berenice,”[9] “The Fall of the House of Usher,”[10] “Morella,”[11] and “Eleonora”[12] in particular feature men who are haunted by their lost lovers. In the scarcely-mentioned “The Oval Portrait,”[13] it’s a woman whose love isn’t returned.

Poe wasn’t the only writer who did this. There are, perhaps, hundreds of ghost stories by others out there that deal with those haunted by lost or broken love—one of my favorites is David Huddle’s “The Day Ghost”[14]; another is Kipling’s “The Phantom Rickshaw.”[15] And it’s interesting to note that Sting’s song “Ghost Story,” which appears on his Brand New Day album, has nothing to do with the paranormal—it’s a lament for a broken romantic relationship.[16]

In short, when a love-bond breaks, probably the last place we’d think to seek comfort is in a ghost story. But it’s worth considering. Ghost stories can be reminders that we aren’t alone in our intense suffering—and that if we don’t let go, we may be doomed.

A friend sent me a video of empty chairs on his back porch in the rain. He told me he’d left them sitting there in the same position for nearly a year—even through the winter—because it had been a favorite hang-out of his and someone who’d left his life, and he missed her, so he couldn’t bear to move them.

Sounds like the makings of a good ghost story.

[1] Since there are several well-known daguerreotypes and portraits of Poe, it took me awhile to track down which one was in the pendant. Thankfully, the Spring 2009 Issue of Richmond, Virginia’s Edgar Allan Poe Museum Newsletter, Evermore, happened to feature the perfect match in one of its articles entitled “Rare Early Poe Photos on Display”:

[10] Read the full text of “The Fall of the House of Usher” here: http://www.eapoe.org/works/tales/ushera.htm

[12] “Eleonora” isn’t considered a horror story—in fact it has a happy ending. Read the full text of “Eleonora” here: http://www.eapoe.org/works/tales/elnoraa.htm

[13] Read the full text of “The Oval Portrait” here: http://www.eapoe.org/works/tales/ovlprtc.htm

[15] A short summary of the plot of “The Phantom Rickshaw” can be found here: http://www.kipling.org.uk/rg_phantom1.htm. The full text is available here: http://www2.hn.psu.edu/faculty/jmanis/kipling/Phantom-rickshaw.pdf.

It’s also interesting to note that in an article in the October, 1999 issue of the South African magazine SA City Life, Mike Behr writes: “’Ghost Story’, one of ‘Brand New Day’s’ most poignantly beautiful tracks, is all about processing painful memories of the past. (It’s very possibly a love song to his father.) ‘That’s what ghosts are,’ says Sting. ‘They haunt you until you acknowledge them. The song is about being haunted on a nightly basis by the past that tortures you mentally until you say, OK, this is the truth now let’s move on.’” You can read the full text of that article, “Sex, Lies, and Media Tape…”, here: http://www.sting.com/news/interview.php?uid=3754