WHAT’S RIGHT IN FRONT OF YOU

My father often talked about “slow glass.” He said if it were in your windows, you could look out on your lawn and see something that happened in that same spot in the past. I thought him genius and asked why he didn’t write a story about it. He said it’d already been written, but he couldn’t recall its title or author.

The concept haunted me as much as it did him. I desperately wanted to read the story, but no one I asked knew anything about it. I gave up, he died, and as the years went on, I’d try searching for it on the Internet—with no luck.

Last year, a week before Thanksgiving, I scored.

The short story is called “Light of Other Days” by Bob Shaw. I could understand why it had so moved my father: one of its themes is letting go of the past so you can move on to what’s right in front of you.

A week later, on Thanksgiving Day, I had a houseful. My Aunt Delores was showing my housemate, Charles, how to make garlic mashed potatoes. There was only one problem: our masher was missing.

I tore apart the kitchen, but found nothing. I got upset—it was like the missing masher was a trigger for mourning everybody that wasn’t around anymore and the way things used to be or could have been.

Nathan did not want to go shopping, but he volunteered to at least see what was open. He returned with a masher. It was cheap and too flexible (not at all like the great one from the 1930’s, solid metal with a thick wooden handle, that had mysteriously disappeared), but it did the job. Peace was restored.

The new masher Nathan picked up on Thanksgiving Day. I think he got it at Walmart.

A few weeks later, I was cooking dinner. I grabbed a wooden spoon from a vase on the counter—which I had done many times since Thanksgiving—and I spotted our potato masher. It had been sitting in the vase the whole time. 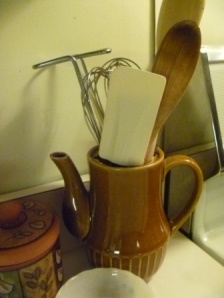 The masher was in its home in the jar next to my stove.

As I had a good laugh, I remembered “Light of Other Days.” If there were something called “slow glass,” I’d probably have it in all my windows, and while I was sitting gazing at “better times,” life would pass me by. I wouldn’t appreciate the people who are here now, the things that are, the way things could be.

The Holidays are a hard time for many people because of the past. This year, if it gets rough, step away from the windows and look at what’s around you (and I’d also recommend knowing your potato masher’s location).

From our house to yours, Happy Thanksgiving.

You can read “Light of Other Days” by Bob Shaw here: light-of-other-days