The mountain of snow around The Wilton Playshop’s sign. This photo was taken Sunday, March 8. It’s been so warm here everything’s melted, so I’m sure it’s down by now!

At last, it’s warming up! What a difference a week makes…snow is melting everywhere! Last week I couldn’t see my parking space; it was under a thick layer of ice. Today it’s back to gravel. To celebrate, I got some colorful markers (they were on sale for half price at Staples!) and I went to see a production of She Loves Me at The Wilton Playshop in Wilton, CT, which was excellent (I had some issues with there being 35 minutes of exposition to get to the actual story, but that’s the fault of the book, not the production). I’ve been to nearly all of the community theatres in the area, and never that one. Based on their level of professionalism, I will definitely be going back.

Who doesn’t love colorful felt tip markers? People who aren’t office supply geeks or under the age of twelve.

This week in writing: Back in December of 2013, I took at course in Magic Realism at The Eckleburg Workshops (I highly recommend these, by the way, and look forward to taking another when I have the time). I wrote four stories for the course: “skin&hair, teeth&bones” is published in Anthology Year Three: Distant Dying Ember; “Reconciled Dysfunction” has the most amateurish title EVER on top of needing work; “Pointing Fingers” has great potential, but isn’t complete; and a story that was originally called “Drunk Talk” (as you can see, some of my initial titles, or “slugs” as I like to call them when I’m drafting, absolutely suck) has been going under revision for quite some time now. I started working with it again this week. It was originally written in the third person limited POV, which I mistakenly tried to shift to first person. That was a bad idea—it just didn’t have as haunting a quality as it did when it was in TPL. But since I had written over the original in the same document, I had to retype the whole thing and put it back the way it was. And critique I’d gotten from my classmates and Heather also needed to be incorporated, so I started working on that.

I also received two rejections this week, one from a market I was really hoping to get into. I had my typical “I’m disappointed” glass of wine, and then moved on. I have a story that’s finished but hasn’t been submitted anyplace yet, and I’ll submit that to a bunch of places; throw it up against the wall and see what sticks, right? When you get rejected, it’s important to turn around and send that piece—or another—out, preferably to several places at once. If you don’t, you might run the risk of becoming too afraid to submit anything for fear of rejection (there are writing forums full of “writers” like this. They write “for themselves” when really, it’s just because they’re afraid). If you can’t take the heat, get out of the kitchen. Rejection is part of the business, and getting tons of them does steel you over time. Yeah, you’ll still get that one every once in a while that’s truly disappointing or hurtful, but that’s what wine is for.

I haven’t purchased a new tarot deck in at least a decade; I used to have so many, and now I’m down to just my favorites. But I wanted something that was really me, and after weeks of searching, I found it: Lisa Hunt’s Ghosts and Spirits Tarot. Each card depicts a ghost story or legend, and the tales come from all over the world (some of my favorites are below – one card in the deck even depicts “The Fall of the House of Usher!”). I highly recommend this deck for anyone who is interested in ghosts and ghost stories, whether or not he reads cards. It’s a fascinating collection of tales, and the artwork is—well—haunting. The deck is published by U.S. Games; if you’re interested, here is the Amazon link: http://amzn.com/1572816619. 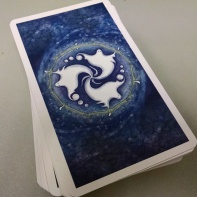 Seven of Swords: This depicts the Duppy—in Jamaican folklore, the earth-bound spirit left behind when the physical body dies. It can rise from the grave and haunt people. Creepy shit if you ask me.

Nine of Swords: I can never resist a ghost story involving a grief-stricken woman, and this one, from Mexico, is quite compelling: a woman drowns her kids after her husband leaves her (because when someone leaves you the first thing you do is go kill everybody else so you can be TOTALLY ALONE and have no reason to live. Right?) Right, because then she dies of grief. Awesome.

Six of Cups: This card, which depicts Revenants—ghosts who wander about because they have unfinished business—is the reason I bought the deck. Revenants are, to me, the “classic” ghost, and I love this moody, colorful artwork.

Ten of Cups: This card is the tarot deck’s “party card,” so it’s no surprise it tells us about The Day of the Dead. I like it because it reminds me of drinking avocado margaritas in the Mexico Pavilion at Epcot. 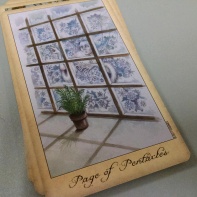 Page of Pentacles: This struck me as odd because it’s Jack Frost – and I’d never known Jack Frost to have anything to do with ghosts in the traditional sense. To read Hunt’s description in the accompanying book, however—which notes that Frost bites kids’ extremities so they don’t forget that being in the cold can be dangerous—it makes sense. I never thought of him that way. Yipes. 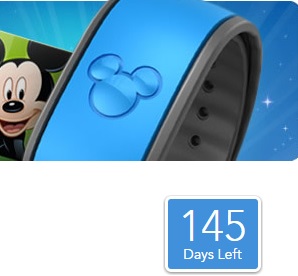 In other news, I’ll be heading back to Walk Disney World with a couple of friends in September (just a quickie – 5 days/4 nights), and Friday, March 13 was our dining reservation window. Logged on at 6 a.m…and got our choices! I can’t say what all of them are, because they’re surprises for my friends. I can say two of them have been something I’ve been dying to do for a long time – and one, very appropriately as you’ll see, is going to be at The Coral Reef.  If you want to hear a funny story about the FIRST time I ate at The Coral Reef back in 2005, you can check out this LIVING WITH DISNEY segment Nathan originally produced for the Inside the Magic Podcast: 5 Living With Disney Nathan S

This was the first time I tried booking online—which Disney loves to push—through MyDisneyExperience, being I wanted something that’s really tough to get into and online booking gives you a one-hour jump on people who use the phone. Honestly, I don’t think I’ll do it again. It’s still buggy—sometimes it said “your request can’t be completed at this time,” but two seconds later, that would change; sometimes it couldn’t find the location I was looking for even if I typed in the full name of the establishment. It’s also turtle-slow. But more importantly? It doesn’t have the magic of dialing 407-WDW-DINE and talking to a Disney Dining Specialist, with whom you can have a conversation. Booking online was about as magical and exciting as paying my credit card bill.

The Maritime Aquarium at Norwalk is located at 10 North Water Street in Norwalk, CT. That’s about 50 minutes south of my house.

The biggest news this week, though, is that I decided to go back and volunteer at the Maritime Aquarium at Norwalk. If anyone’s known me longer than a dozen years, then you’d remember when I spent more hours a week there than I could count, serving as a “tour guide” who shared information about the animals. I also supervised visitors’ up-close-and-personal encounters with rays, crabs, sea stars, horseshoe crabs (and other denizens in our Touch Tank). Between 2001 and 2004, I logged over 1300 hours. I hadn’t written a short story in ages, I was thirty pounds lighter, I was dating a total ass, and I was really directionless in terms of what I wanted to be when I grew up.

The world was also different. Not everyone had cell phones, and if you did, they were phones, not handheld machines that do everything but make a phone call well. If you had a digital camera, it was exorbitantly expensive, and ways to “print out” the photos you took weren’t so hot (most aquarium visitors took only a few photos on their print cameras, and when they did, they always used a flash!) When you rented a movie, it was on VHS, although the transition to DVD had begun and was well underway. Asking to have a cassette player in your brand-new car didn’t generate odd looks, and, in fact, most of my friends were still making “mix tapes.” The mp3/digital movement, as I recall, hadn’t started yet; you bought something on cassette, or you bought it on CD (and many CD’s were expensive at $20-$30/pop). Everyone and his mother didn’t buy everything on Amazon, which was only six years old. Blogging didn’t exist, and there was no “selfie” (if you stopped and did that, people stared).

Taking the abbreviated summer training course in June of 2001 was the highlight of my life; I remember I just couldn’t believe how excited I was, being I’d always wanted to work with fish in some capacity but was never encouraged or supported. So working at the aquarium—and spending tons of hours there—meant I could still be a part of that world by giving my time and sharing my passion.

After that “Summer of the Shark” in 2001 (where I imagine we saw an attendance spike, but have no way to prove that), 9/11 happened. Aquarium volunteering gave me stability, a reason to keep going in what had become an uncertain, scary world. It gave me an identity, and it’s the place that built my confidence up enough to get a volunteer position behind the scenes at Mystic in the Fishes & Inverts Department (REALLY doing dirty work with the fish, not just talking about them!), and later, return to finish college all the way through to my Master’s (in Creative Writing). 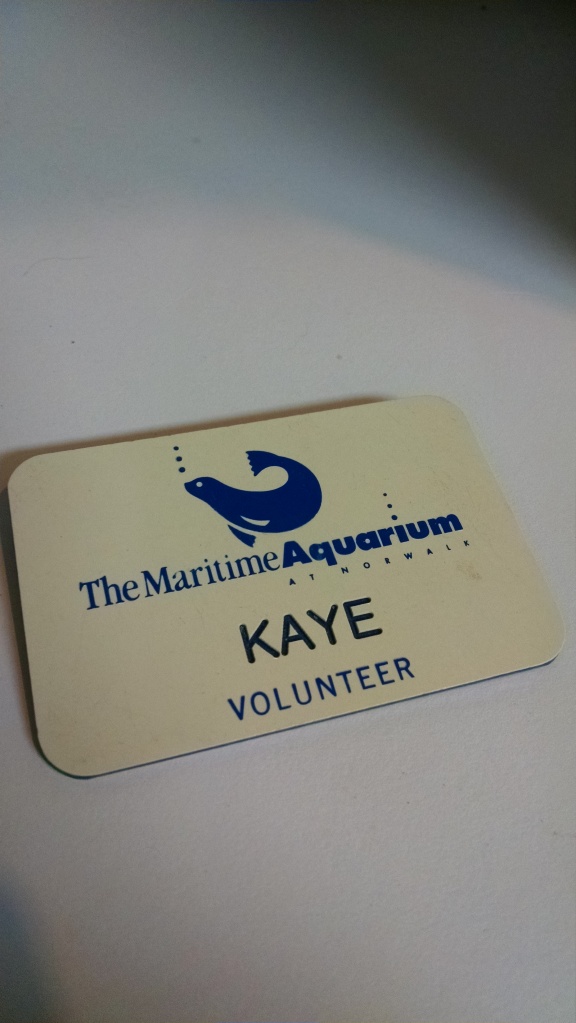 My original volunteer badge, which I plan on continuing to wear because it’s in good shape — even if it looks a little yellowed from having been stored improperly in a non-archival plastic bag. I think it gives it some charm, no?

So why go back to the Maritime? One day I just woke up and said, “it’s time.” I stepped through those doors and it was the same, but different. It was all the nostalgia of the past and the warmth of familiarity, but all the magic and mystery of the future. I’m also, of course, nervous. A dozen years ago I could stand in front of a smack of jellies and talk for 45 minutes without stopping, never repeating the same information twice. I don’t know if I have the brain power for that anymore, but I’m certainly going to try! The challenge now will be to see how I balance my life there with my writing. Might there be a lot of killer fish stories coming out of me? Only time will tell.

Has the return of spring made you start to think about doing something new, or returning to something you used to do and miss? Leave it in the comments below!