← HEAVENLY SAVINGS SAYS SHE’LL HAVE A “LASTING IMPRESSION” OF SKELETONS
“WATERPROOF” IN WINTER 2010 ISSUE OF THE BATTERED SUITCASE! →

For those of you who haven’t read it, the first story in Skeletons in the Swimmin’ Hole, “Doing Blue”, takes place on Christmas Eve and opens at a costume party thrown by a guy who’s convinced he’s Jesus.

Shortly after reading the book, my friend Kristina Hals Strobel dropped me a note on Facebook.

“I had the oddest ‘Doing Blue’ moment last night. Yes it had Jesus in it, it had costumes, it had a pilgrimage. It was 1 a.m. and the Goth Ball had just let out. There we were, standing on the sidewalk, with Jesus who was expounding on faith with a flask hidden in his Bible. My husband, in cassock and collar, was bowing to him, Goth girls behind him listening and giggling. He was very convinced he spoke the truth and that all should be listening to him. But, there was a nonbeliever who was stealing his thunder. Speaking of science, blood and the universe, and the realization that chaos is organized. We left for home, the rest left for Denny’s.”

I thought she was dreaming and wrote, “…your dream sounds kinda creepy.”

She responded, “Dude, that wasn’t a dream! That actually happened on Friday night!” and posted the following picture: 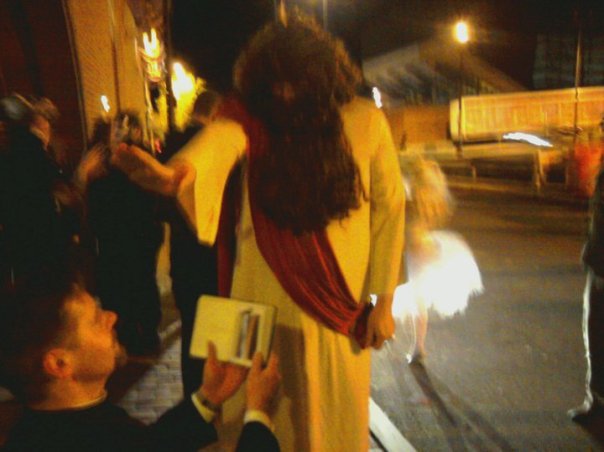 Is “Doing Blue” not fiction after all?

From our house to yours, Merry Christmas, and may all your dreams come true!

← HEAVENLY SAVINGS SAYS SHE’LL HAVE A “LASTING IMPRESSION” OF SKELETONS
“WATERPROOF” IN WINTER 2010 ISSUE OF THE BATTERED SUITCASE! →