Gild the Holiday Weekend with the KINDLE release of COLOUR OUT OF DEATHLEHEM for charity! 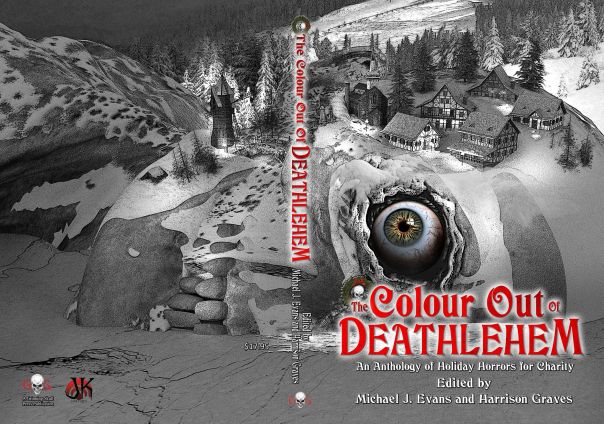 Happy Christmas Eve! The Kindle Edition of Grinning Skull Press’ holiday horror anthology Colour Out of Deathlehem, which contains my story “Feeding the Babies” (if you know what Treevenge is, you’ll love this!) is now available—best of all, 100% of the $4.99 purchase goes to The Elizabeth Glaser Pediatric AIDS Foundation.

This is a very worthy cause, and I worked long and hard on a brand new story just for you in the hopes that you’d all lend a hand!

The true spirit of Christmas is really in giving. If you’ve got $4.99 to spare, have a Kindle or the app on your phone or PC and love scary Christmas stories? Consider treating yourself while giving to someone else.

HOW MANY WRITERS DOES IT TAKE TO TEAR DOWN A TENT? (or, Teamwork’s Key: what I learned at the Middletown Open Air Market and Festival)

Writer Stacey Longo, left, and me, in the early hours of the Open Air Market. It was so cold and we hadn’t had time to drink coffee before leaving for the fair, so that coffee was so good it was scary, believe me!

Writing is a solitary business, and can be a lonely one at that—that’s why it’s so important to find people like ourselves with whom we can connect. What I’ve always found interesting, though, when we get together, is how we connect—depending on the reason for the gathering.

For example, I’ve been a member of six critique groups and four of them I founded and moderated for several years. The way we supported each other—regardless of which group it was, how many members there were, or the meeting’s format—was on sharing each other’s disappointments, improving work, and creating a safe social space. At both Burlington and Goddard Colleges, where I pursued my writing degrees, the focus was on survival and moral support. At the Norman Mailer Writer’s Colony, the focus is on how we live a writer’s life. And when I am working on National Novel Writing Month (not this year, I’m just too busy!), the focus is always on the escapism and joy of writing, and sharing that joy behind this crazy thing we’ve chosen to do with ourselves.

New England Horror Writers, an organization I joined way back in 2008 but didn’t get even marginally involved with until earlier this year, showed me yet another plane on which to connect—teamwork. We’re here to help publicize each other and get our work out there, but we’re also here to help each other in this most-contrary-to-a-writer’s-nature endeavor: see me, I write. And sometimes, it’s not about publicizing, it’s about teaching each other how to be comfortable in our own skins so we can better work together. Nowhere was this more apparent than at the 9th Annual Open Air Market and Festival in Middletown, Connecticut—we spent the day matching customer’s preferences with each other’s books to getting the tent…down (somebody else had to put it up! Maybe teamwork doesn’t go smoothly ALL the time?).

So my parting thought is this: if you’re a writer who’s feeling a little isolated, consider what it is you’re missing—and then search for it.

Here’s a virtual trip through the weekend.

I planned on spending the night before at Stacey and Jason’s. I stopped at a rest area on I-91, and the trees were so beautifully lit in the setting sun I just had to take a photo. This hasn’t been a spectacular fall here in New England, but it’s in a moment like this I could see that the ghost of it is there.

On the table is NEHW member Dan Keohane’s book, Margaret’s Ark. The skull glass is mine—a Poe Season favorite for me. 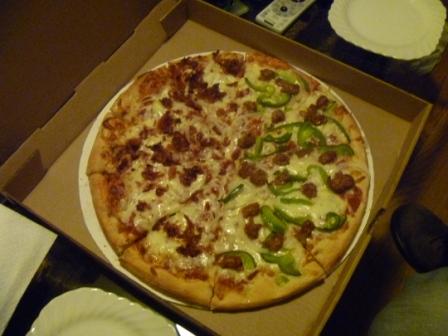 Pizza! Whenever there’s an event like this, I always think it’s important to really turn it into…well, an event. Do some fun things surrounding it. The thought of getting up at 6 in the morning from home and driving all the way to Middletown and back just wasn’t as exciting as hanging out the night before with a couple of friends. 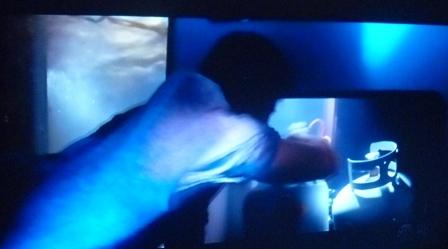 Piranha 3-D, which happened to be on one of the movie channels. This is a scene from near the end. I didn’t care for this movie at all, but the fish themselves were about the coolest-looking beasties ever; I wouldn’t mind having a photo of one up close for my wall.

Jaws was on after Piranha 3-D. I always loved this particular shot of Roy with the cigarette hanging out of his mouth because for some reason he reminds me of my Dad, back in the 1970s.

See how intense this acting is! This guy plays the ubiquitous geek, the one who figures out how to defeat the beast.

Serious. This situation is extremely serious. 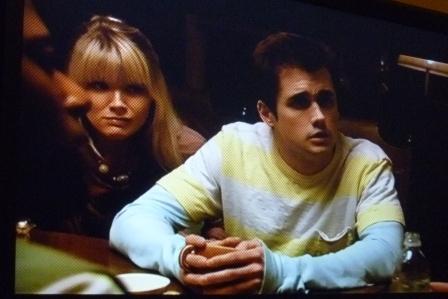 Really. The acting in this scene wasn’t bad—obviously, it was so surprisingly good I had to get photos so that people would believe me—and also so that I’d have the memory.

A tense moment from the film One-Eyed Monster. I was struck by the similarity of this little speech to Quint’s “I’ll catch him and kill him for ten” scene…hard to believe he’s talking about a penis; on the other hand, if you think of it in terms of metaphor for a burgeoning woman’s fear of sex, it gets even more entertaining.

The back of Jason’s truck the next morning, loaded up to go to Middletown. 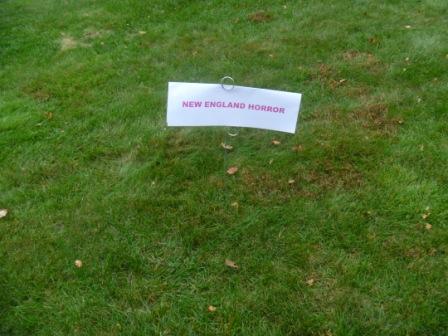 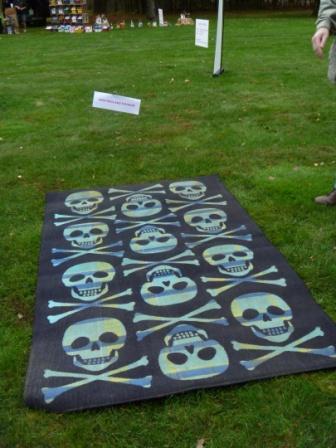 The very cool skull rug that Stacey keeps for all of our outdoor events. Since everyone asks: she got it at Christmas Tree Shops.

We begin the unloading process at the site; Stacey checks on the “Hell in a Handbaskets” (more on this later) to see how they survived having been crammed in between all the plastic tubs.

The beginnings of the Stage Left table. Books by Nathan Wrann are on the right. 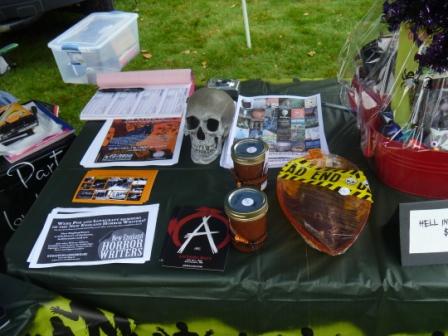 A close-up of the beginnings of Stage Left. Here, we see the NEHW flyers, postcards for the upcoming Anthocon, apple butter, and a giant chocolate rat. The skull is for decoration although at least once or twice during any event we get asked if it’s for sale.

A close-up of the other side of the beginnings of Stage Left. Hell in a Handbasket, the NEHW T-shirts, and Nathan Wrann’s books and Burning Inside DVD.

A close-up of Nathan Wrann’s books.

A close-up of Kasey Shoemaker and Stacey’s books.

More of Stacey’s books, and copies of Shroud—Stacey’s work is in there, but Tim Deal and Danny Evarts, minds behind the mag, are members of NEHW.

We had treats on hand. Jason and the Fangtastic cupcakes.

These Fangtastics were very popular with the kids who stopped by our booth.

A close-up of the Fangtastic cupcakes. 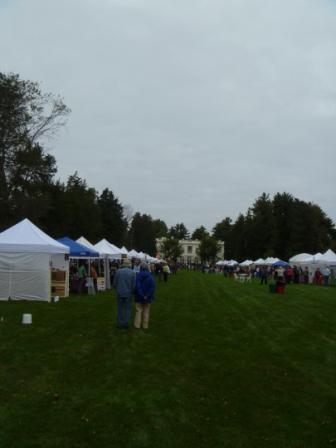 A long shot of the 9th Annual Open Air Market in Middletown. Our booth was at the beginning end. This was taken standing in the center, right near our booth, and looking up toward the Wadsworth Mansion. 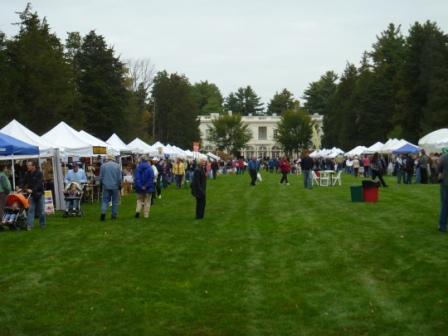 A shot of the booths and the Wadsworth Mansion, where there was an orchestra playing.

Here, the Middletown Symphonic Band fills the air with a Frank Sinatra Medley. The portion I filmed was of one of my personal favorites of his “It Was a Very Good Year.” 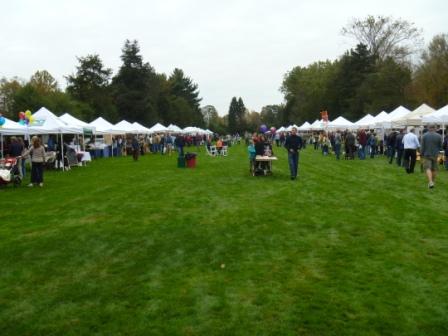 This is a view of the Open Air Market looking back toward the entrance. The New England Horror Writers booth is all the way down on the right.

I do love New England harvest festivals, especially in the fall. There’s something about being able to buy products directly from a farm. 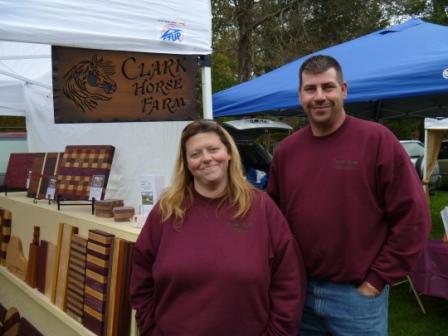 There’s a story behind this—Jason, Stacey and I had a heck of a time trying to figure out how to set up our tent (referred to as an “Instant Shelter Product” on its accompanying instructions). The owners of Clark Horse Farm—who specialize in making custom chicken coops—were so kind; the husband came over and helped us (I’m sure he was quite entertained watching the circus for awhile). Thanks to him, we were able to get it up and get rolling in just a few minutes. Visit their website at http://www.clarkfarmbusiness.com! 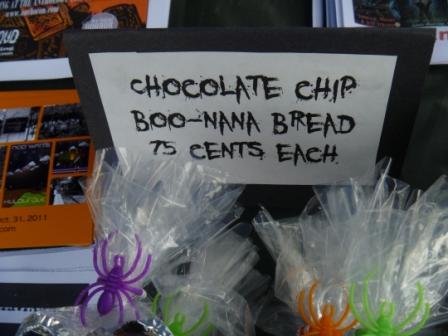 A close up of the Boo-nana bread.

Visitors check out our offerings. 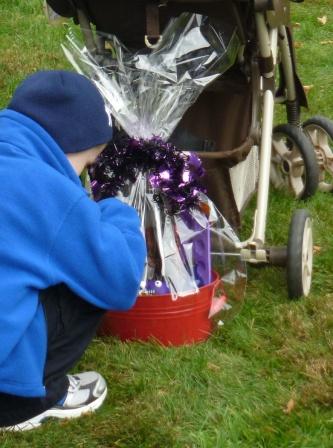 A young visitor checks out the Hell in a Handbasket his mom just purchased.

A good look at one of our Hell in a Handbaskets. These would make great gifts for any Halloween or Horror freak—especially for Christmas. Each basket contains an autographed book by a New England Horror Writer member, fun gadgets like skull corkscrews or ghostly cups and plates, candy, and some other fun goodies.

A shot of the Hell in a Handbasket display. 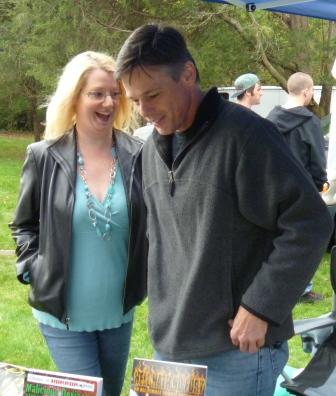 Kurt Newton with his book display.

Kurt Newton, Rob Watts, and me.

CHEESE FRIES! Stacey and I couldn’t resist. We were right next to a food cart, and so we were finally worn down by smelling the good stuff all morning. It probably also didn’t help that we were freezing. Hot food was a help.

At every event there’s a stand-out moment, and this was one of them. My friend Marianne Lyons came all the way up from Danbury to see me and get a copy of Skeletons in the Swimmin’ Hole. Here I am with her husband, Michael.

Stacey signs a copy of Hell Hath No Fury (an all-female zombie anthology) for a young zombie lover. 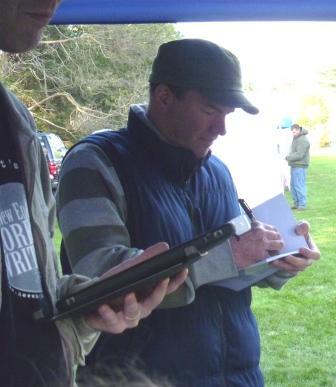 Rob Watts signs a copy of Huldufólk for a fan. 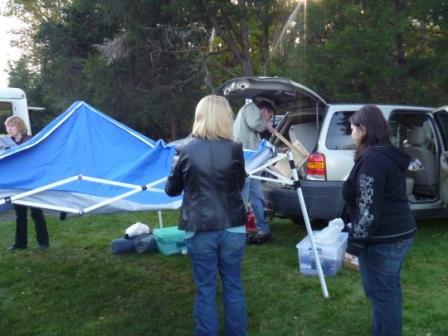 Just as the tent was a nightmare to get up, it was also a nightmare to get down! Here, we see everybody working on it—Stacey at the left, Jason’s ducking into the fan, Kasey has her back to the camera and the girl on the right is Rob Watts’ girlfriend, Maria Arakil. I wasn’t doing anything. My job was just to stand there and listen to Rob Watts yell, ‘somebody get that camera away from her.’

…so, how many horror writers DOES it take to get the damn tent down?

Stacey and Rob confer on the instructions.

As I recall, whatever it was they were instructed to do didn’t exactly work.

The spoils of having a man who loves me at home! “Went up to Bridgewater” means the boys went up to the cemetery for cocktails, a Poe Season tradition.